Today I have a magazine for Book Review Day - the latest issue of Inspirations, number 73.  I keep all my Inspirations magazines on my book shelves, though, so maybe it is partly a book! 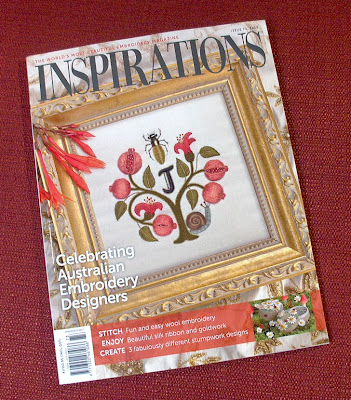 I was introduced to this excellent magazine at one of the bookseller stalls at a stitching and needlecraft show at the San Mateo Fairgrounds, back when I lived in California.  There was a whole rack of back issues on display, and I was standing there mesmerized by all the beautiful covers, along with another rather quiet woman and her pushy friend.  The pushy friend was not a stitcher, but she was strongly encouraging the quiet woman to put a deep dent in her credit card by buying several of the magazines.  I was internally debating the same thing, because I knew it had to be all or nothing.  Buying just one would make me want the others even more.  The dynamic between the two friends was a little tense, though, so I moved away.  Eventually they did too.

I went back, of course, and agonized a little more before I caved and bought about 15 of them.  Many of those are now sold out issues, so I am still glad I did it!  The quiet woman also ended up buying at least 10, shortly after me.

Inspirations bills itself as "the world's most beautiful embroidery magazine," and I have never had reason to doubt it.  It features beautiful, classic designs from top embroidery designers around the world, using the best materials and combining modern and traditional techniques.  Several different types of embroidery projects are included in each issue, from surface embroidery with cotton, wool or silk threads, to stumpwork, goldwork, silk ribbon embroidery, various whitework and pulled thread techniques, blackwork, cutwork, and on and on.  Beyond the designs themselves though, what really drew me in was that each project has detailed, thorough instructions with colour pictures on how to do the various stitches and techniques.  Anyone with a little basic embroidery knowledge and a willingness to learn can tackle most of the projects in each issue.  I have learned so much since I started reading it!

Ok, let's talk about the current issue.  There are nine projects, all from Australian designers.  (Inspirations is an Australian publication.)  Australia is a hotbed of embroidery talent, which I think has been nourished and supported by this magazine over the years.  So there are a number of excellent projects this time! 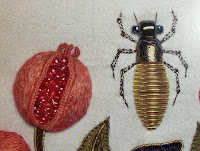 The cover piece by Jane Nicholas is one of the ones I quite like.  Usually stumpwork (raised embroidery) is not my most favourite technique, mainly because I hate the raw edges that you often get with the detached leaves and petals.  But in this piece the edges are all turned under, which I like much, much better.  The pomegranates are juicy, the padded snail shell is particularly nice, and I love the goldwork beetle.  Nicholas also has a whole book of beetles in various techniques, which is great fun.

Carolyn Pearce has been a steady contributor to Inspirations since the earliest issues.  I aspire to make bullion roses as nice as hers some day!  Somehow she manages to taper the ends of her bullion knots, which makes all the difference.  I would love to know her secret!  In this issue she manages the same look with silk ribbon: 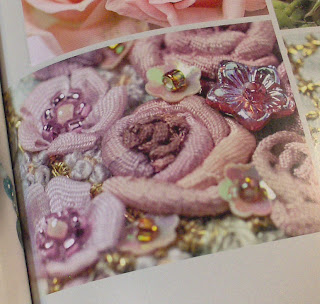 This is something I'll be trying soon.  I think I have some of those Czech glass flower beads in my stash somewhere too.  While I won't be making this exact project, I'll definitely be using some of these ideas. 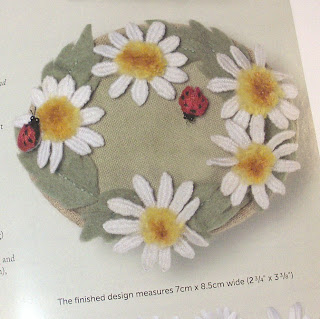 These daisies are the answer to two outstanding dilemmas I've had.  One is a UFO wall hanging that combines cross stitch and quilting.  I wanted to incorporate daisies in it somehow, but the right idea didn't come along until now.  These will be just the thing!  Maybe the lady bugs too.

The second thing I've wanted for a while is to make a brooch of my online identity photo with the Black Eyed Susans.  I've grown quite attached to that photo, and I think it is very recognizable, so I'd like to have something to wear in the real world that ties it in.  I debated thread painting it, but this technique will be better.

The magazine publisher, Country Bumpkin, also sells kits for all the projects.  These are usually a good value, because they save you chasing down specialty supplies from several different stores.  The Australian dollar is a lot higher these days, and shipping can be costly, but the convenience may still be a benefit to overseas shoppers.

Two other projects that I really like in this issue are the Hardanger box from Janie Hubble and the delightful Yvette Stanton, and Margaret Light's pretty pouch made from blue and white ticking and embroidered with beautiful red pelargonium in Gumnut's juicy perle silk.  The kits for them both are tempting me now!

Well, this was probably my longest post yet, but I cannot say enough about this excellent magazine.  It is the only subscription I have left.  Highly recommended!
Posted by Monica at 12:00 PM