I was very excited to actually start sewing Sedona Star!  I began with the ring on Month 1, because that looked the easiest to me: 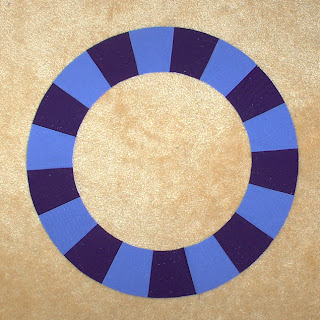 The light colour here is actually this light purple fabric.  The camera made it blue.  But the piecing went really well.  I very nearly sewed the two ends wrong sides together, even after reminding myself about it!  But fortunately I realized my mistake before actually sewing it.  I was so encouraged by this initial success that I moved on to the centre star: 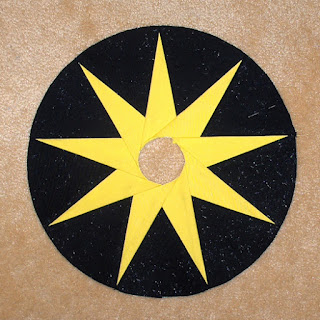 I realized a few things when I was about halfway through this.  The first was that my colour scheme is not going to leave me any room for error!  I deliberately chose the high contrast scheme to show off the more difficult parts of the quilt.  I wasn't thinking though, that it meant I am going to have to do those parts really well.  Anyway, so far, so good.  I'll have to be super careful with those points when I sew the two circles together.

The second issue is that the dark fabrics really show lint!  I can see that this is going to be a problem for the lifetime of the quilt.  It looks much worse in the photo because the flash picked out the light particles.  I wondered where all that lint was coming from, and I realized that it is from the Ricky Tims Stable Stuff.  It is shedding tiny, shiny, polyester fibres as I work with it.

On the TQS forum Margo suggested that I can wash the finished flimsy to remove all the Stable Stuff before I quilt it.  Now that I've seen how these fibres stick to the fabric, I don't think that will be an option.  For now, I'll just use a good lint roller before I take any final photos!

Otherwise, though, the Stable Stuff is a dream to work with.  It is much easier to use for paper piecing than the vellum was.  It makes a very clean fold when you are cutting the seam allowance.  The vellum didn't always want to fold along the line, but with the Stable Stuff there is no problem.  And because the Stable Stuff is more like Pellon interfacing, it doesn't remember all the fold lines, so you can wrinkle it up all over and it still goes back to lying flat when you're done.

When I lay the two parts together, it looks like this: 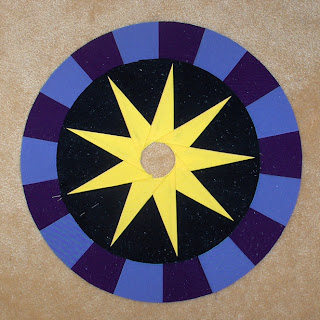 My intention with the centre of the quilt was to keep it simple, and I am satisfied with the result so far.  The main focus of the quilt will be the applique blocks we're doing this summer, so I didn't want to do too much here.  I'll show you one or two of the log cabin points tomorrow, and then it'll be on to the applique circles!
Posted by Monica at 9:00 AM