I may not have been blogging for the past few days, but I've still been sewing!  I'm down to the last 19 yoyos on the yoyo quilt from the cover of the June 2011 issue of American Patchwork and Quilting.  I started with 38 strips appliqued with 10 or 11 yoyos each.  Now I've joined them into 19 long strips, and all that's left is to applique the last yoyos over the join and sew the strips together:

I am trying to be as random as possible.  It really is an act of willpower not to organize the colours!  My only rule as I was appliquing the yoyos was to not put two of the same fabric right beside each other.  Actually, though, I am a little sorry I did that now, because a truly random sample would have given clusters of fabrics that would have added interest.  Too late now.  But, for the rest I am going to allow the random universe full reign!

I have a couple more observations on the construction of the quilt to share.  First, for the background fabric, the pattern suggests a batik with a small repeat.  The need for a small repeat is obvious, but I am also glad that I went with a batik rather than a print.  These strips are handled a lot as you are appliquing the yoyos, but because the batik has such a high thread count there has been very little fraying.  So I would say that a batik is a necessity here.  Because the yoyos are so lumpy, there is no way that you could cut the strips wide and trim them down later.

The second thing to watch out for is how you deal with the thread tails from the yoyos.  In the allpeoplequilt.com demo video, which seems to be gone from the site now, they suggested that you just bring the thread tails down through the centre and to the back of the yoyo.  This turned out to be poor advice.  This is what has happened to several of my early yoyos: 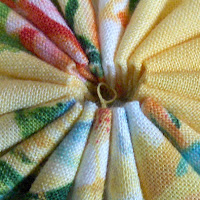 The stiff hand quilting thread has a tendency to pop up out of the yoyo.  Later on I started to pull the thread tails back down inside the fabric on the same side as the knot, and there has not been any problem with those tails.  I will have to get myself a self-threading needle to fix the threads that have come loose.  Fortunately, it is not a big disaster, just an annoyance.

Hopefully it will not be too much longer before this one is ready for quilting too!