Amping Up the Mariner's Compass Blocks

Back in December, my inspiration for my colourway of Sedona Star started with the quilt Paradise in the Garden by Jean Wells.  I have loved that quilt ever since I first saw it!  Jean took New York Beauty blocks and made them into sunflowers, and I thought I could do the same thing with the Mariner's Compass blocks in Sedona Star.  There are three different Mariner's Compass blocks in the quilt, each done three times, for a total of nine blocks.

In my first plan for how to colour those blocks I only used two colours of yellow for the "petals."  I have been thinking for some time now, though, that this will be too repetitive.  I decided to use three colours instead, and to play up the differences between the three variations that Sedona Star designer Sarah Vedeler created.  But, I still wanted to keep them looking like flowers.  I decided the best way to meet all my goals would be to add some secondary piecing to the blocks.  For Month 4, I am going to add a 1/4 inch "shadow" to the lower layer of petals: 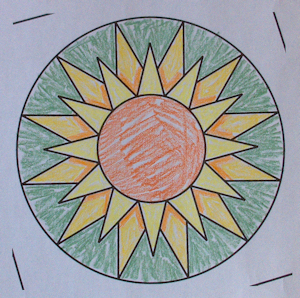 I haven't tried this with the fabric yet!  But I think it will be doable with a 1/8 inch seam allowance.  If I have to I'll increase the shadow to 3/8 inch.  All the photos today are of enlargements of the uncoloured pdf file that Sarah provided in December, which I coloured with my trusty crayons.

On a side note, do you find that you use the same colours over and over?  I haven't pulled out my crayons in years, and I found that the colours I needed for these blocks were the ones I'd used the most!  You can probably see the resemblance with my profile photo too.

Anyway, I was very happy with how this one looked, so it was on to Month 3.  My first thought was to repeat the 1/4 inch shadow (the new one is on the right): 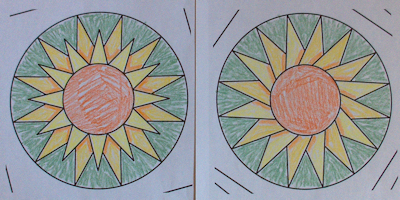 But, I didn't think that had enough punch.  My second try:

That's pretty good, I thought, but I also wanted to see what would happen if I just widened the shadow from the first try:

This one was too "whirly" for my taste, and not flowery, so the second one is the winner.  For the last one, Month 5, I first tried the same 1/4 inch shadow as Month 4:

Again, I felt that things were getting repetitive.  I wondered what would happen if I didn't add a shadow to this month, and just changed the colours of the back petals:

Winner!  Now when I look at all three variations together, they look unified yet distinct:

Let's see how they look with my fabrics!  I still haven't got my iron, but I'm thinking that now that I've decided to fuse the applique on Month 2 instead of paper piecing the blocks, a regular iron will do the job.  I'll just find the iron with the slowest auto shut off available and be done with it.

Choosing colours for Sedona Star
Posted by Monica at 12:55 PM