It is hard to believe that my last post on this project was in February, but I finally have just a few more odds and ends to finish up on my "Juin" (June) sampler from Bonheur des Dames. It has been a long time coming, given that I started it in 2004! It was packed away for many years, but I took it out again in early 2011 as part of a big push to clear up some UFOs. So it has still been over a year of on-and-off work.

Yesterday I finished up the leaves and stems on the middle cherry motif: 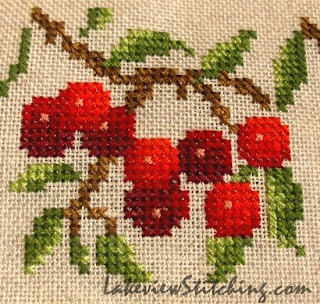 They still need a bit of backstitching around the cherries. And today I did the "Juin" lettering in petit point:

The close up photo is a little misleading - this is 32-count linen.  It was fun though!  No colour changes, it used one strand each of medium and dark green blended in the needle.

So, I have one and a half cherry motifs to go, and a fair bit still of backstitching over one around the figures in the middle row (which is a little tricky), and that'll be it!  Now that I've written this post, I really will have to finish it soon.  ;)
Posted by Monica at 5:08 PM