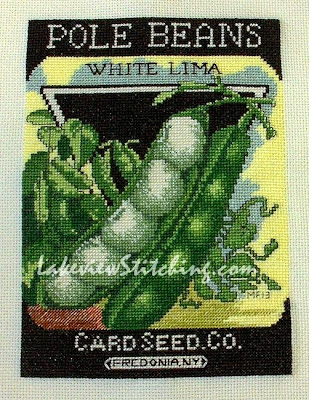 The other day I was reading back in my blog, and I was chagrined to see that it was back in June that I was starting to hint that this project was almost finished. I guess not! But, now it's finally done.

I started out thinking that this would be an easy, tv watching project, but it was not nearly as forgiving as I expected. Even when counting was not an issue on the large flat areas, I still had to give it my full attention in order to make neat stitches on the 18 ct aida and cover the fabric as much as possible.

In the end it was just sheer persistence to finish it. I would strip 6 strands of the black brown floss each day, sew until they were gone, and then put it away again. Now I think I will do the same thing with all the metallic gold on Celtic Spring,* which has been stuck for a while too. I have too many cross stitch projects on the go, so I am determined to finish some of them! Anyway, it is nice to have this one done. :)


*Holy moly, I see I haven't posted on Celtic Spring since last November!!! But, I do want to finish the dratted gold in the hem before I show it again...
Posted by Monica at 2:33 PM