Over the past two weeks I've done quite a bit of prep work for my version of Leanne Beasley's Down in the Garden. It's finally all coming clear in my mind! Choosing the fabrics has been the final catalyst for me.


When I started my other stitchery quilt, Best Friends Forever, I started by choosing thread colours that I liked. Since then, I've had a heck of a time finding fabrics in the same colour scheme. In the end, I will have to use almost entirely monochromatic blenders for that quilt. Which is fine, but I really prefer prints. Down in the Garden will be based on Tamara Kate's Flight Patterns collection. I've already fussy cut the Bargello print in the photo above for the Dresden blocks: 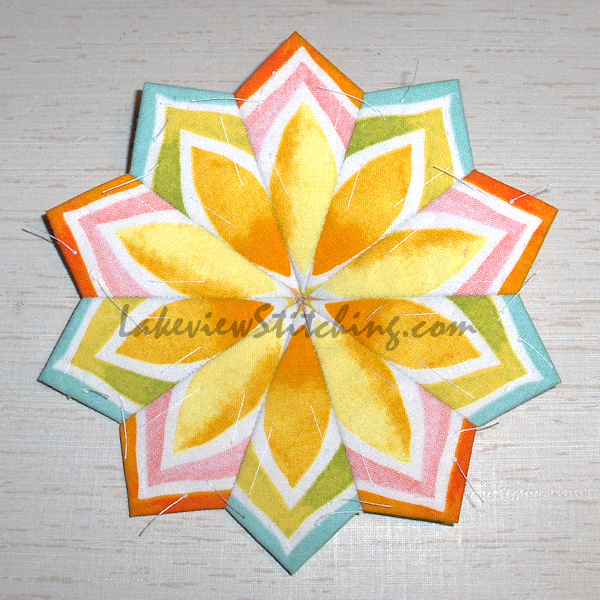 I will also use the Bargello fabric for the border. The thing I like the most about this collection is the light, watercoloured brushstrokes that were used by the designer. I want to keep that feeling with the rest of my fabrics. I pulled out some of my Riley Blake ginghams: 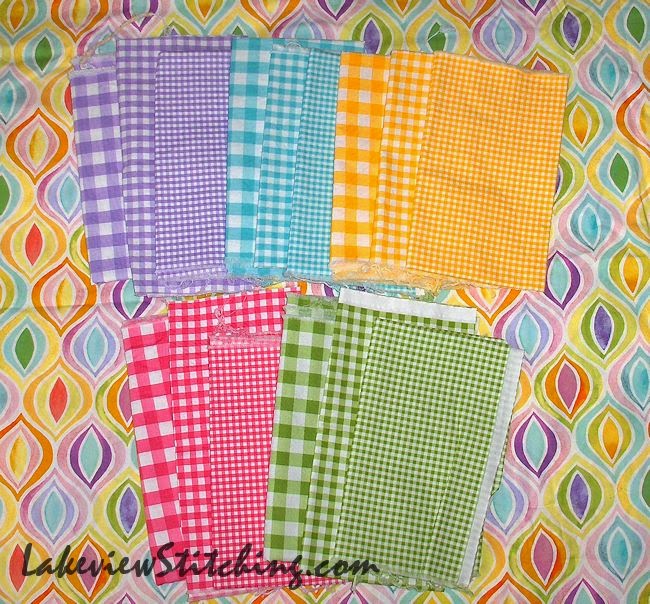 And I added some dots and simple prints: 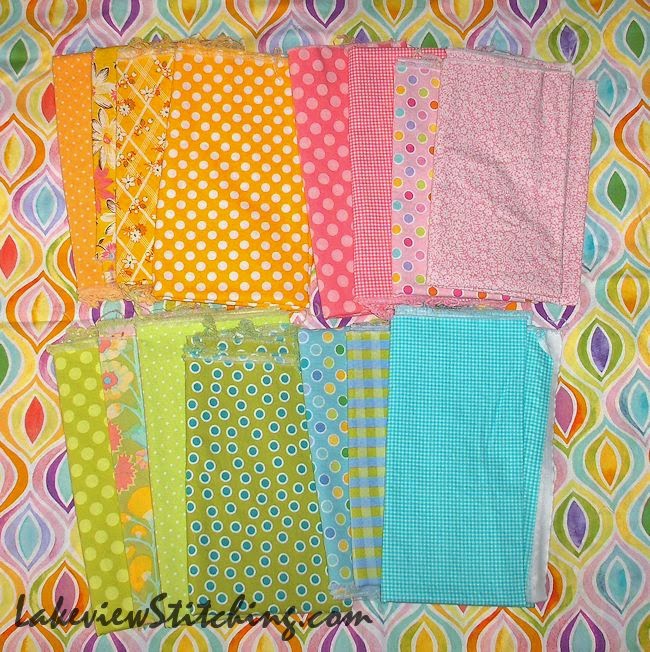 Almost all the fabrics have some white areas, which keeps everything light and about the same saturation level. Since my last post on this project, I've been stressing about the herb pots that I've already stitched. Is the fabric I used for the pots too dark or too grey? Here they are in the mix: 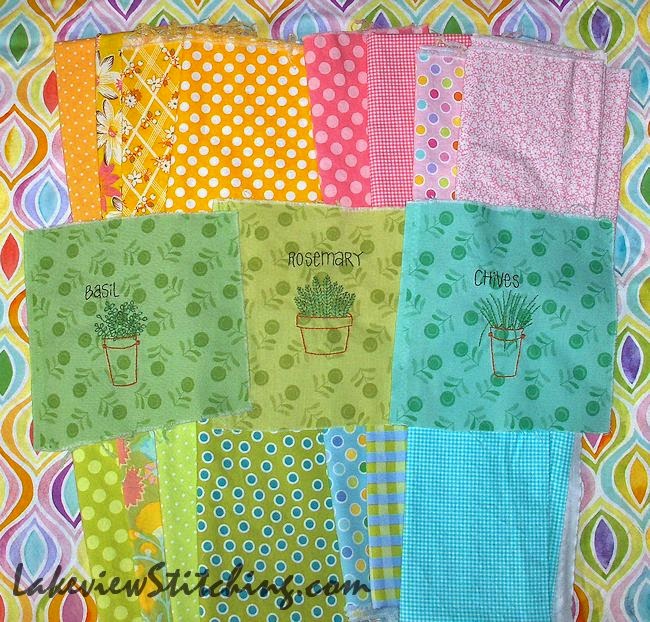 I was worried that the herb pot patches would be dark holes against all the other light fabrics, but they are not too bad in this photo.

Now, though, there is another wrinkle, because I have changed the font in all the other blocks. I mentioned last time that I planned to change the words on the quilt to a couple of quotes that resonated better with me. I used Microsoft Word to do the layout for me, and just taped it over the original words where they occurred. Here's my revised layout for Block 5: 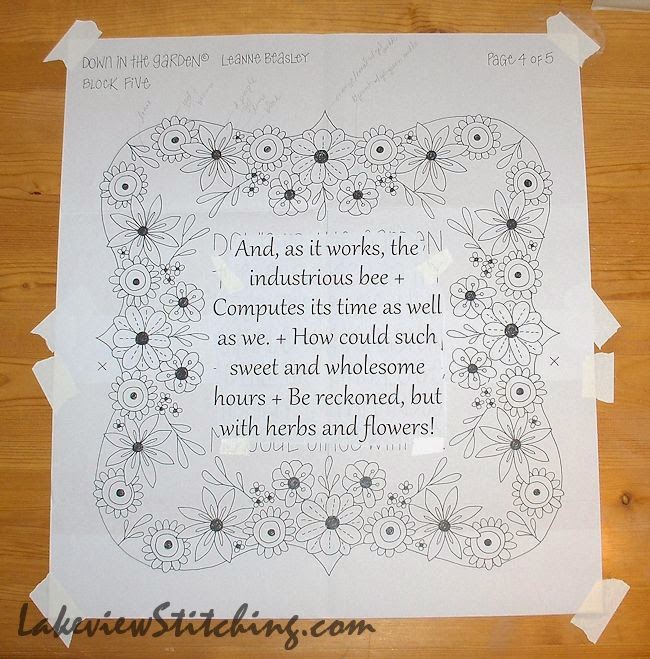 The font is Gabriola, 65 pt. I added a plus sign for the line breaks, which I plan to stitch as a little flower. I've found that a light box is not necessary with light fabrics. I just shine a bright light down from the top. Here it is all traced out: 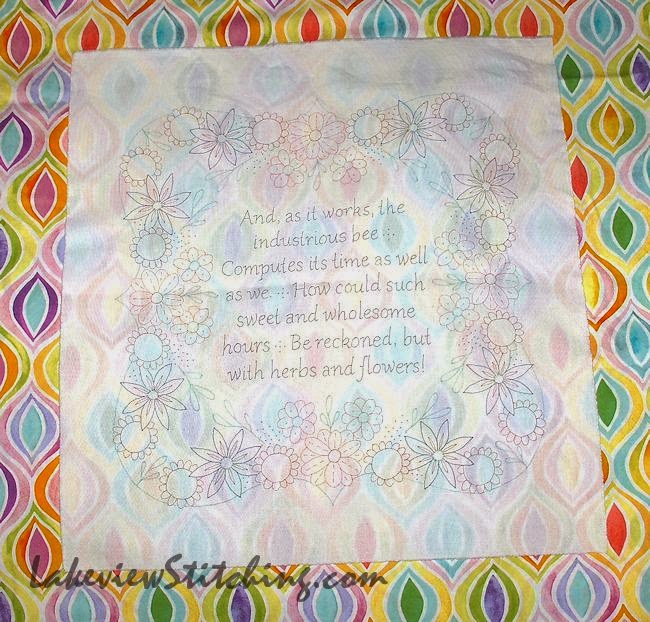 That's 2.5 hours work! The block is 15" square. As I did with my redwork, I traced everything with pencil first, and then went over the lines with a 005 Pigma Micron permanent pen. I hate it when the lines rub off while you are stitching. And this time, I'm also planning to add some watercolour effects with Tsukineko inks before I stitch, so the lines have to be permanent.

Almost all the stitching will be stem stitch, because I don't want to spend as much time stitching as I have with Best Friends Forever. Plus, I've realized that the inking is still going to take several days.

Some of the smaller flowers, though, will be done with lazy daisies and granitos. For those flowers, I only marked dots where the needle will go through the fabric, rather than a whole loop that may not be covered by the stitch. You can see how that works on one of the birdhouse blocks: 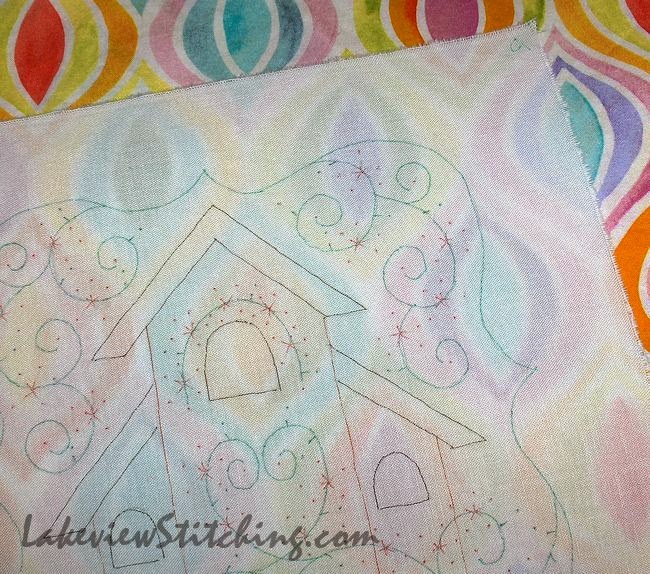 All the tracing is now done. I'm still a long way from stitching any of these big blocks, but I have started on the smaller ones. I'm going to wait and see if I will need to re-stitch the herb pots, either onto lighter fabrics, or with the new font. I'm really happy with my stitching on those, so I'd hate to have to do them again. Stay tuned!
Posted by Monica at 3:16 PM

Email ThisBlogThis!Share to TwitterShare to FacebookShare to Pinterest
Labels: Down in the Garden, Quilt Design, Stitchery