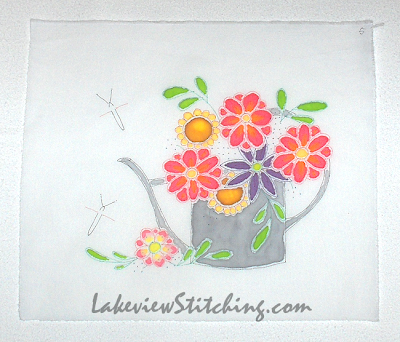 There were just two flowers left for my last day of inking the stitchery designs from Leanne Beasley's Down in the Garden quilt. If you missed them, you can find Part 1 here, Part 2 here, and Part 3 here. At this point, I thought it would be pretty easy. But, you should never count your chickens before they're hatched!

The large coral flowers, in the photo above, did go well. It was the last flower, the light pink one, that gave me a lot of trouble. Here's my well-used test sheet again: 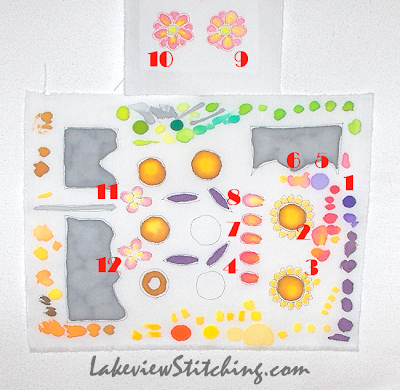 The two remaining flowers were similar in shape, one large and one small, so I decided to make them two shades of pink, so they would be related but still different. Both would start from the Tsukineko Rose Pink ink.

I had run out of room on my test sheet and I didn't have any more test flowers, so I decided to just go ahead on the real blocks. Probably not advisable! I tried two with water, and small dabs of yellow and pink. Then I abandoned the water for good, and just made dots of yellow and pink with dry white fabric in between. Fortunately, the first two pieces were so light that I was able to go back after they dried and add darker pink dots to them as well. If you look closely at the first photo, you can see that's what I did.

I used the final version of the small flowers on the centre block: 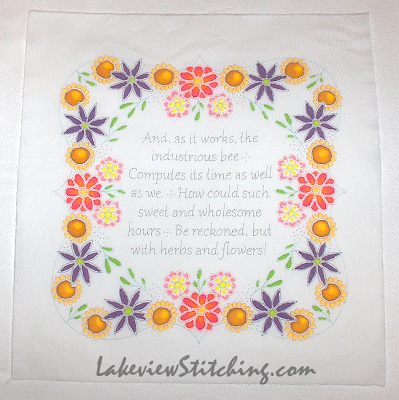 Although they were not what I intended, I think the small flowers still work anyway. Plus, now I have the opportunity to go in with the stitching and balance things a little more.

Next time I'll have some of that stitching to show, and my final thoughts on the process. It's been quite a journey! Please click here to read on.
Posted by Monica at 11:31 AM