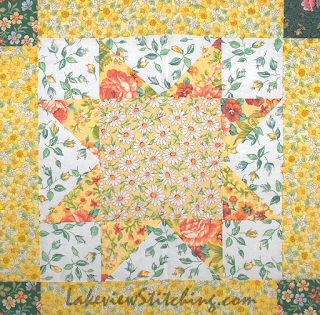 The second of my Friday Fall Flimsy parade is actually the first flimsy I ever finished, Circa 1998. It has been packed away since then with the vague intention of using it some day for free motion quilting practice. When I had to move everything after our spring flood, all the boxes on the bottom ended up on the top, exposing the sordid underbelly of my early quilt experiments: 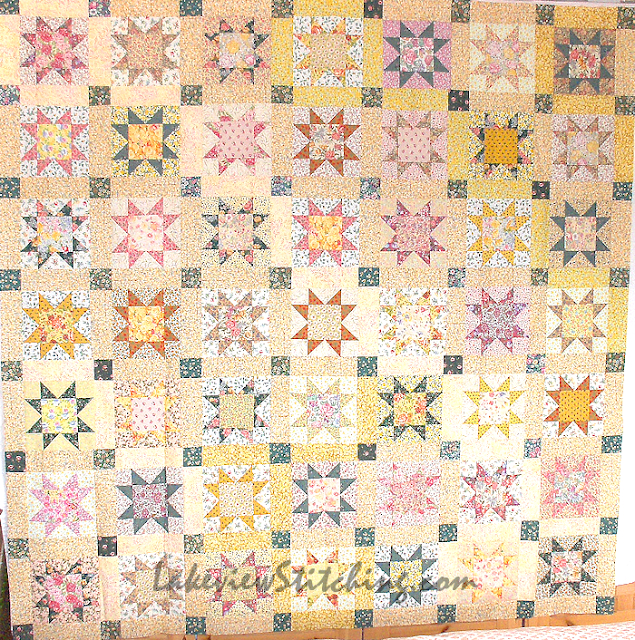 Not too bad from a distance, but I can tell you that pretty much everything that could go wrong did go wrong on this quilt! Even when I started starting quilts in the late 70s, my feeling was that if I could set in a sleeve, sewing a quilt would be a piece of cake. So I had no lessons. How hard could it be? But, as most of you know, putting a quilt together takes a lot more precision than sewing clothes.

Living in California in the mid to late 90s, I started this, my third attempt at quilting, with a collection of small scale yellow and pink florals. Every fabric is a floral. Some are from proper quilt shops, but many were very cheap fabrics from Joann's. 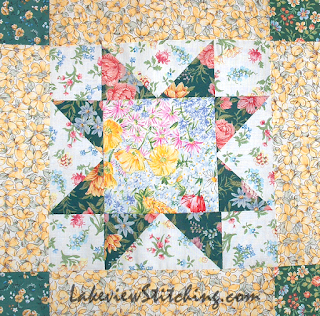 Mistake #1: I didn't pre-wash the fabrics.

Mistake #2: I used a steam iron to press the blocks as I worked. Imagine my dismay when some fabrics literally shrank before my eyes under the iron! But not all of them, of course. So none of the pieces, or finished stars, were the same size. But, that was a problem even before I ironed anything, because...

Mistake #3: I didn't know to add extra seam allowance for rotary cut triangles. So none of the triangles fit properly, and some of the seam allowances are very scant. It is amazing that most of the stars look as good as they do. 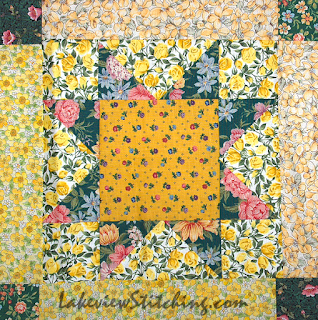 For the most part I think I had a good understanding of value, and these really wild blocks were deliberately wild. But, I realized that I was going to run out of my first sashing fabric (seen here on the top and right side). So I decided to make the sashings scrappy too. But, I couldn't find that same yellow, and I ended up with four different yellows in the sashings. The disaster was spreading, and I couldn't go back, because...

Mistake #5: I was attaching the sashings as I went along. This was really an attempt to correct Mistakes 1 through 3. Since all the blocks were different sizes, I reasoned that I could adjust the width of the sashings to even them up again. Which kind of worked, because the quilt is almost exactly 72.5" square. But most of the joins look like this: 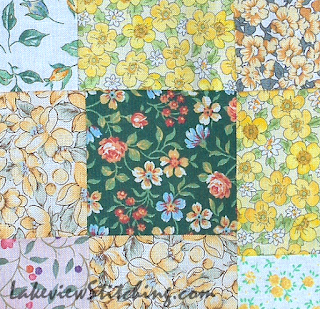 Yeah. You know that quilt judge criticism, "straight lines should be straight?" Not so much: 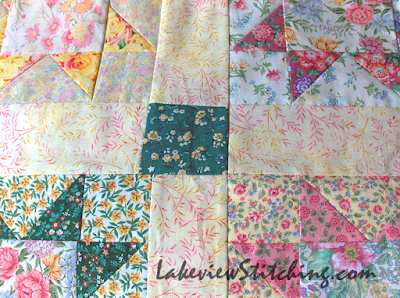 There was a plan to add a Flying Geese border, but it was all too, too much at that point. Like Kenny says,

I guess I'm finally ready to improve my free motion quilting, so the plan this fall is to get this basted and least partially quilted. It will be a good warm up for the others!

Email ThisBlogThis!Share to TwitterShare to FacebookShare to Pinterest
Labels: Circa 1998, Quilt Design