Last week I finished all the blocks for my Modern Utility Quilt. I was determined not to slow down on this one! For example, when I made a cutting mistake, I just added an extra strip to bring the block back up to size: 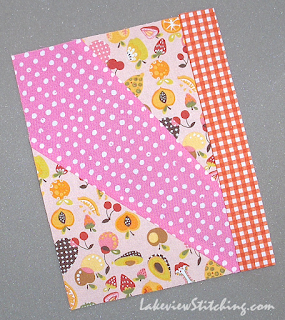 Extra strips are a classic improv device, I think, but this first one really was a corrected mistake. The second one, well... let's just say I was not averse to another mistake! But after that my orange strip was gone and I buckled down.

My plan was to just motor through. The quilt is too big for my design wall, and since it's already so busy I thought it would be best to just distribute the fabrics evenly and sew it up. First I sewed all the blocks into pairs, and then some of the pairs into rows of four.

Monday morning I awoke with the conviction that I was selling myself and the quilt short with just a random layout. I thought maybe there could be a few "crystallized" areas near the centre of the quilt. And, I realized that I could put just the centre of the quilt on the wall, and then fill in randomly around it while I sewed it together. 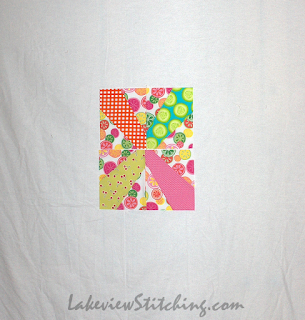 Out came the seam ripper, and I hunted through all my sewn pairs for four blocks with this same light citrus-themed background. 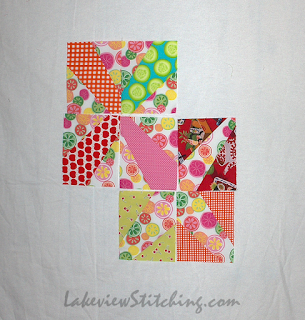 Then I thought it would be nice to carry the same background out into the spokes around the corner. There was a lot of hunting and seam ripping required to find the right fabric combinations. Plus, it's trickier when some of the blocks point left, and some point right. 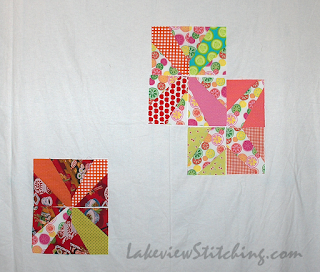 Then I wanted a cross with all red sushi fabric backgrounds, in more or less that spot on the quilt. More hunting, shuffling, and seam ripping. 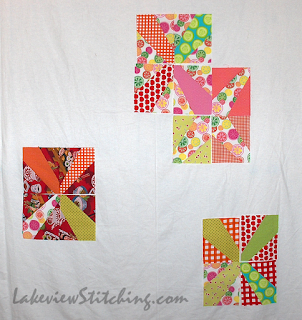 And finally, an all-green cross a little further down. 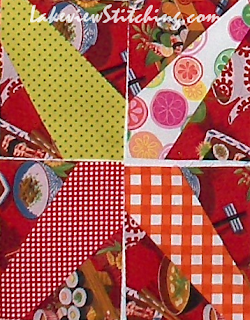 Then I just started filling in around those three points. I had to rearrange the sushi cross with the fat ends together, because that's how it fit into the pattern.

Even though I spent an hour or so with the seam ripper, all my prep work sewing the blocks into pairs did pay off at this point. The main layout came together quickly: 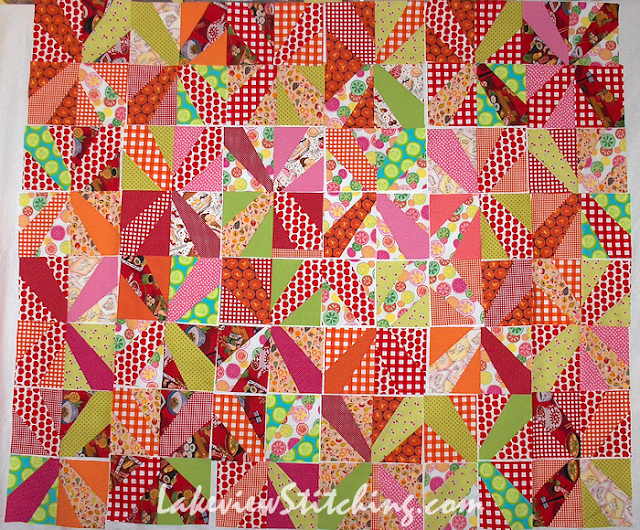 There's just a hint of a glow in the centre, and a few interesting repeats to catch the eye. There will still be a full row of crosses to add to the top and bottom, and along the right side.

After my experience with the blues in Collector, I knew the greens would be important here, so I was careful to keep them even. Once again though, contrast is king. I don't know why I am surprised, but I am! I thought the almost solid pin dot fabrics would be more important, but it turned out that the high-contrast large ginghams, and the red and white apple fabric, are by far the most demanding.

I am keen to see it all sewn together now! And then, there will be the question of a border. I know, how will I manage to put a border on this? We'll have to see, but, I do want to add about 4" around, and I don't have enough fabric for more blocks. A debate for next time!

But for now, I'm linking up with the Ad Hoc Improv Quilters again this month. Back in my first Improv post, I mentioned that I wasn't yet in danger of never going back to regular sewing. Now I can feel my whole point of view shifting! I still have traditional projects that I want to finish, and start, but I've already thought of at least five new projects for Improv as well. Maybe I will finally start to reduce my stash!
Posted by Monica at 12:51 AM