In 2009 my local quilt shop had a bolt of this gorgeous "Wild Wings" fabric: 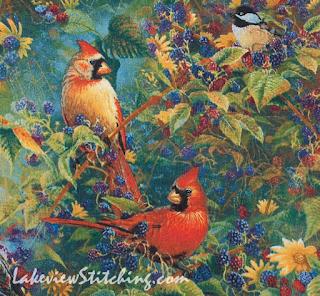 I think it sold out in about 3 weeks. Fortunately, I bought 3 metres! I had a vague plan of using it for a border for a lap quilt.

In November 2010 I finally started the project. The plan was to make a pieced centre with alternating yellow stars and red/black diamonds, and use the cardinal fabric for the border. But, my piecing was not very accurate then, and it didn't go well. And the design felt uninspired.

So, I redesigned it a gazillion times (more or less). In 2013 I decided to take apart those first blocks, trim the units more accurately, and re-sew the blocks. In 2014 I decided to make the units into star-in-a-star blocks. 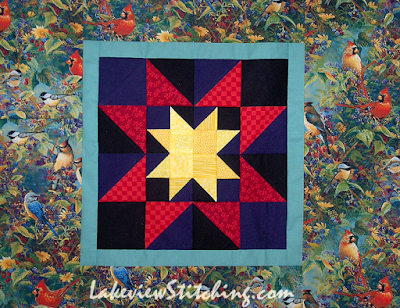 The setting idea is from a quilt in an old Quiltmania, possibly named "Les Roses Bleues," but I can't swear to that. That quilt also had a large background print, a floral (with blue roses), and they framed each block in a narrow border like this and "floated" it on the background. Although I planned to, I never made it. So, I was happy to use the same idea here:

Since the background is almost the "focus" of the quilt, I used most of my 3 metres. The borders were pieced, because I wanted to break up the repeat on the fabric, and try for a more natural distribution of birds. You can see that the centre, though, is one 20" square of fabric.

Overall, I think my plan worked better than I expected! I was worried that the block colours wouldn't match the background, or that the solids would be too jarring against the print. But, I think the blocks are balanced with the print, and neither is too dominant. I was very careful when I chose that jade green solid, and took the print to the store to match it.

Most of all, I am glad to have the flimsy done! And I do not plan any further delays on the quilting. Suddenly I'm in a finishing frame of mind again! Let's hope it lasts. :D