I know I've been MIA for a while, so I've been going through my camera this morning to see what I can share with you all. I've got some "progress" photos on the last round of the Gwennie Medallion, and my new guild challenge fabrics.

First, though, the autumn colours have been particularly good this year: 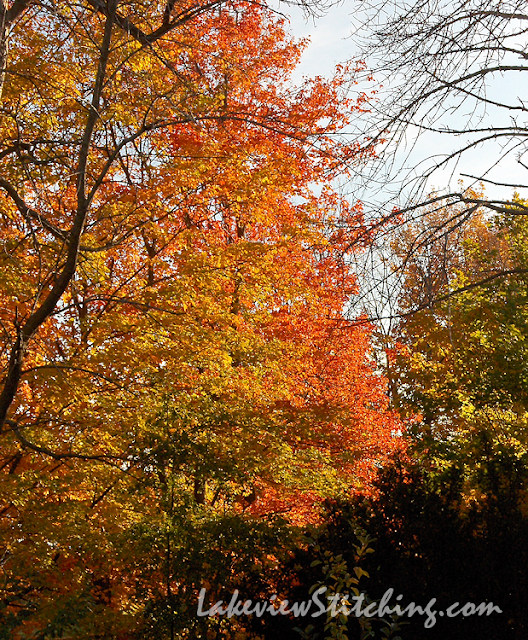 Outside, everything is looking beautiful. Inside, well...

The final clue for the Gwennie Medallion is "something fishy." My plan for the fishies has been the same since I read the clue. But, I still haven't started them, because I am wrestling with how to handle the corners. 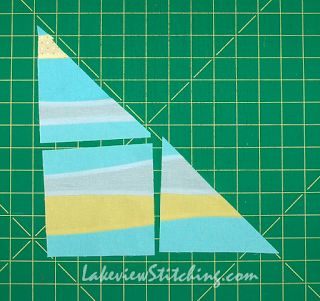 I thought it would be good to carry the diagonal line of the light/dark log cabin layout into the final corners. I've saved this large triangle of background fabric from the basket block in Month 1. Maybe it could be the start of my corner blocks?

I made some strategic cuts. 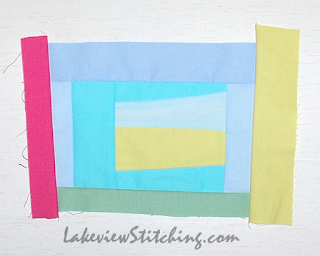 The all-blue corner was not too bad. Don't ask me why it's so wide. I'm sure I had a reason. 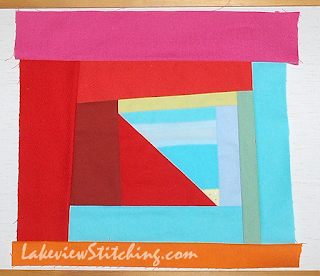 I paired the blue triangles with some solid red to carry out that diagonal line, and built the block out log cabin style, as I did with the bear claws.

Since the project started my plan has been to have a wide solid red border after the final round. The idea with this corner was to transition the diagonal line out into the solid red.

"If I keep adding strips, eventually it will look right," I thought. 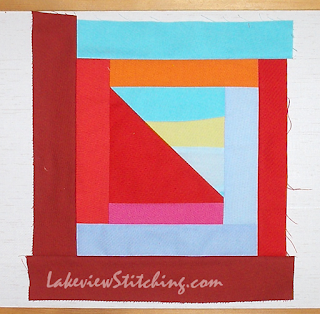 "I have to actually put it up on the wall and see how it all looks together," I thought.

Well, yes, those bloody red triangles were horrible, and no amount of building out would fix them.

Then I thought I would put my initials and the date in the corners instead. I unpicked all the blocks so I could re-use the strips for the letters.

I was happy with that plan, but yesterday I realized that another week had passed, and I still hadn't started. Back to the drawing board! 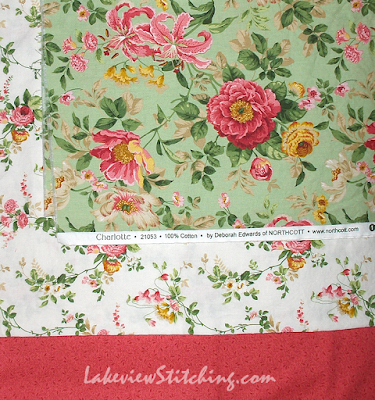 The soft, traditional style has felt like a relaxing contrast to all these Gwennie shenanigans, so I've been spending a lot of time on it. Plus, it's due at the end of February, so there isn't a lot of time for deep thought. Unfortunately, I cannot share any progress photos at all, because it will be blind judging.


So, that's what's up with me, Next week may be a busy one, with a little playing around for AHIQ, the Cardinal Stars finish, and maybe the fishies too!
Posted by Monica at 11:26 AM