Here we go with Prairie Star 2.0! I've changed the colour scheme on this sooo many times, but this week I put a freeze on the changes, and cut the fabric.


It's been a long road. Prairie Star is a Judy Niemeyer pattern that I bought in 2012. This is another quilt that suffered in the doldrums of family apathy that I described in the recent Hen Party post. And now, I think it will really benefit from the fresh energy I got from that finish!

The original plan was to make it for my dad, who wanted it in red and gold. I struggled with the colour placement:

In hindsight, I can see that a lot of my "design" problems were actually caused by conflicting requirements from my dad. And then, I didn't like that red and dark cream floral background in my first attempt at the centre star: 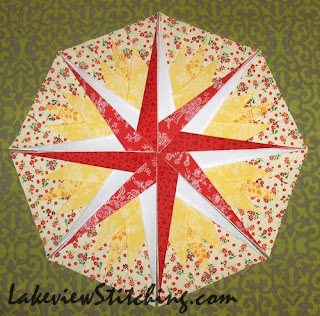 The floral was too brown, and washed out the lemon yellow. The lemon yellow was going to be a big feature in the square blocks around the star, and I had a lot of it, so that was a big problem for me. Still, I kept going, and the next two sections turned out well: 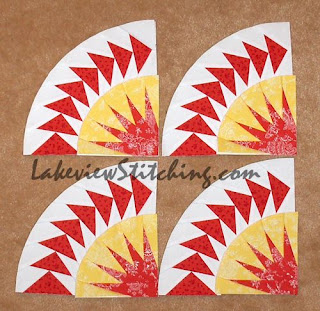 Then I started to have doubts about that red spiky border. From a feng shui perspective, a bunch of red spikes pointed in toward the centre of the bed is not good. My dad is elderly, and it just seemed undesirable. I tried to involve him in a redesign, but he had come to the point where anything new, even a quilt, was simply too stressful. He didn't want it any more.

What to do? I packed it away, and every so often I'd get out the coloured pencils and try another variation.


In the baking heat last summer, I thought the quilt would be nice in cool aqua and fresh green. If those spikes around the edge were green, that would solve my feng shui dilemma. And they'd be like prairie grass! Light bulb! 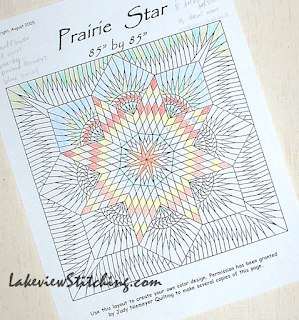 I bought yards of a pretty aqua and red floral, and some coordinates. Plus, I wanted to save something from the first version. Since the arcs of red flying geese were the most work, and they seemed to match, I decided to use them. But, this kind of large scale foundation paper piecing requires the iron at every step, so I planned to restart it when the weather cooled off...

Last week I finally opened the boxes and looked at it again. Gosh, were those red flying geese really going to work with the aqua? Hmmm. Where are those coloured pencils? Maybe I need to think outside the box. What about something totally different?


No, that would be terrifying on the bed! Like a hippie tie dye.

What if I just carry the red of the flying geese through the star, I thought? With lots more white. And that lemon yellow fabric I originally planned for the squares is already cut. So how would that look? Hey, I like it! Now, what about fabrics? 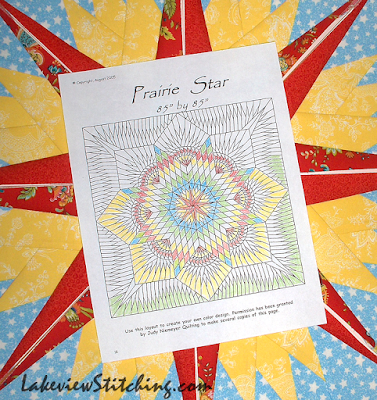 No more shopping, I said, let's see what else I can find in my stash. Well, that turned out to be no problem at all. So, I have scrappy greens for the "grass," the original geese and melon spike units that I made in 2013, the original lemon yellow print for the squares, and a range of fun stash prints for the Lone Star. Freeze the plan! I cut the fabrics, and now I'm committed. :D
Posted by Monica at 10:50 PM