Moth in the Window

My grandmother used to say that if the first butterfly you saw in the spring was white, it was good luck. After a couple years of seeing yellow butterflies, I was happy to see a white one this year! 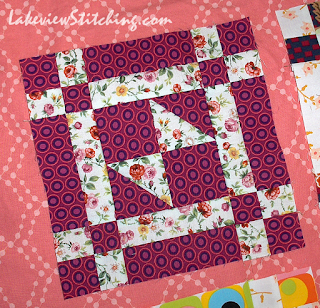 Mine was IRL (in real life), but maybe this block set the right tone. Yes, it's another new Bonnie Hunter project! This is Moth in the Window, from Bonnie's new book, Addicted to Scraps: 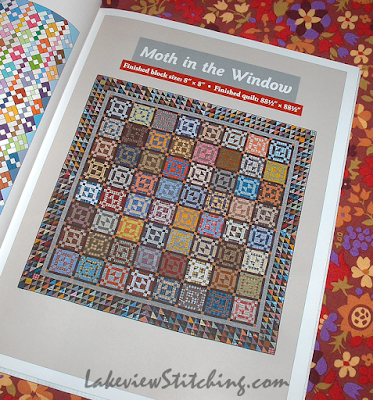 I know I've talked a lot about how Orca Bay will be my next new quilt, but I am still tweaking my plan for that. In the meantime, when Robert Kaufman announced that the Kona Color of the Year would be Pink Flamingo, I had a burning need to make a pink-based quilt. But in February, nobody had it in stock. And then I found this pink print from Blend, which is almost the same colour. It was discounted to about half the price of Kona (Kona is expensive in Canada) at a fabric outlet near here. Score! 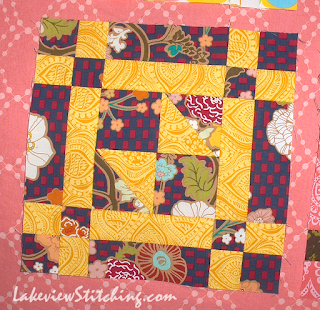 Bonnie's Moth in the Window is made with plaid shirts and black sashing, and I love it. But, I had a feeling it would also look good with pink sashing. And, the simple two colour block is a great way to show off your fabrics.

I had the day free on my birthday recently, and I thought, what could be better than a new project? An hour with the calculator, a couple of hours moving heavy boxes in the basement, whittling down to about 60 fabrics, rough cutting them all, and by the end of the day, the first block made: 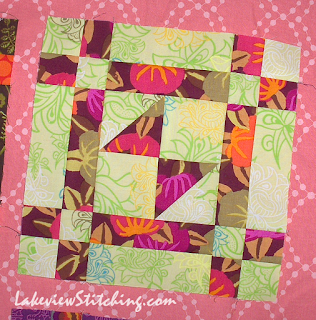 Most of my colour inspiration is coming from collections that Pat Bravo did for Art Gallery a few years ago, especially Indie. The three backgrounds above are all her fabrics. Even though the sashing is pink, I don't want the quilt to be too "bubblegum." I chose all the fabrics to coordinate with the sashing. Of course there is a little Kaffe too: 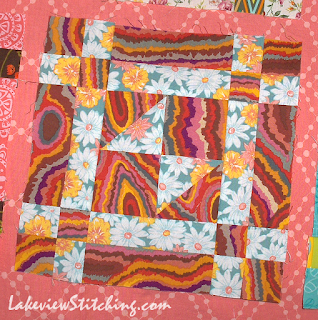 And I don't know how long that daisy floral has been in my stash. But aren't they awesome together? It is so fun to try out different combinations. Even the wilder blocks blend when they're all together: 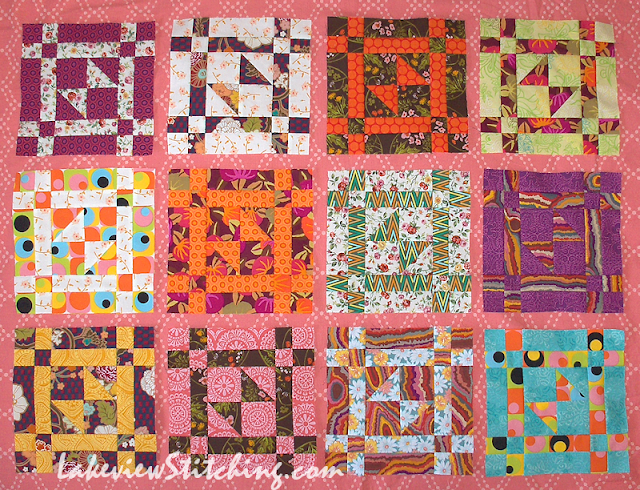 This is just the start, there will be a lot more of the blue-greens to come. My original plan was to make 56 blocks, and use leftover squares for the border. Bonnie used HSTs in the border, but I still need at least 800 HSTs for my Cheddar and Indigo quilt, so I thought I'd just use squares. I sewed up some strip sets... 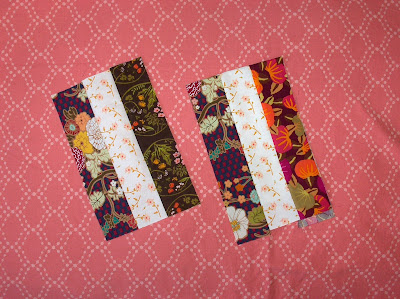 ...but I decided yesterday that even in these nice fabrics, they will not do anything for the quilt. So now my plan is to make more blocks, hopefully 90, and just put 3" of the pink around the edge. Maybe there was a reason I never put all the fabric away again! Other than mere laziness...

Anyway, I am having a lot of fun with this, and now I have a project for the Kaleidoscope of Butterflies again! Come back on May 1 to see how much progress I've made.

Email ThisBlogThis!Share to TwitterShare to FacebookShare to Pinterest
Labels: Bonnie Hunter, Kaffe, Moth in the Window