Two days ago I realized that I really, really want to finish something before I start Sedona Star.  I think I have enough balls in the air!  Edward's quilt was the closest to completion, so I've been making a big push on it.

The last time I had it out I was really stressed with it.  The seams wouldn't line up, and I had to unpick a couple of times, which I hate.  I literally had to shake off the tension every time I sewed a seam.  It was nuts.

Since then though, I've been working on my nine patches, which have been going together so well, and they must have totally shifted my vibe.  When I went back to Edward's quilt the problems had vanished.  A friend of mine always says "a rising tide raises all boats."  I think those nine patches have been worth gold to me!

So today I finished joining the centre blocks and started to think about the border.  I'd already decided not to use my inspiration fabric because the wine-coloured circles will clash too much.  I decided to use this batik with the large white kanji instead: 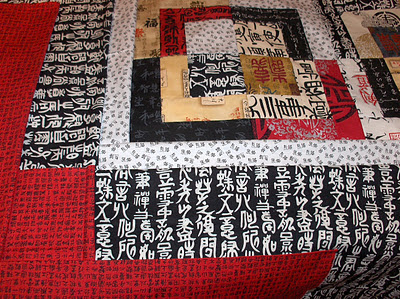 When I first laid it out it was so busy that it made me a little nauseous!  It looks better with the red binding fabric over the edge, but I think it is still too much.  Fortunately, I found a yard of this quieter fabric in my box too: 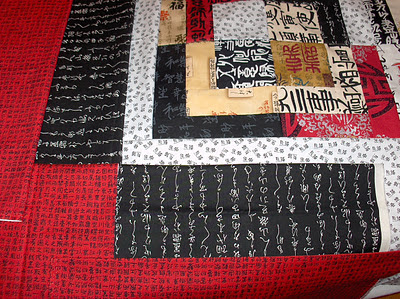 I think that will be much better.  I also fiddled around with the red cornerstones.  There are four different reds in the quilt, and I thought about putting one in each corner.  But I definitely want to bind it in the red you see here, and I thought the red fabrics might clash more when they are right beside each other rather than scattered around the quilt.  I did think that putting just this one fabric in all four corners would be nice: 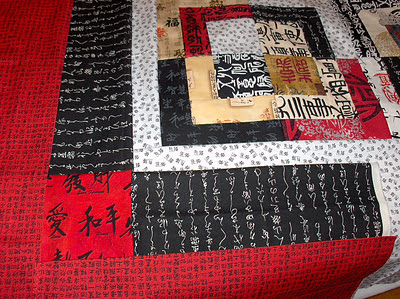 This fabric has the characters for "peace" and "good fortune" and similar good wishes, which I thought would be a nice sentiment.  I am still on the fence, because the two reds are a little off, although they are closer than they look in the photo once again.  I do kind of think that the second option, where the corners and the binding all match, might be too perfect, if you know what I mean.  We will see how it goes tomorrow.  My plan is to have the top finished before I start my Sabbath at 6 pm!
Posted by Monica at 7:55 PM