Happy Valentine's Day!  Today is the 50th anniversary of my parents' engagement, so Valentine's Day has always been a big deal in my family.  In honour of the day, here is a redwork project that I have just started work on again. 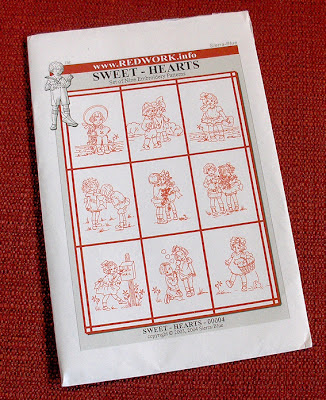 I bought these at www.redwork.info several years ago now.  I have been to the site more recently, and I am not sure if it is still active, it has not been updated in years - so use with caution!

I have been on again, off again with this project.  Sunday evening I started to think about it again, and I made a new quilt design incorporating just these nine blocks.  My previous plan had been to combine these with some other redwork patterns, but the whole thing was going so slowly, and poorly, that I just abandoned it.

From the front, my first attempt did not look that bad, but it was chaos on the back:

It doesn't look like all the ends on the back matter, until you see the block against a white background: 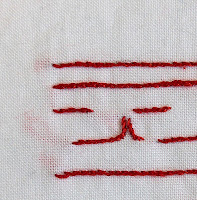 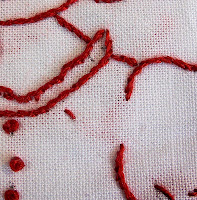 I did briefly consider lining the blocks with red fabric to hide all the ends!  But that didn't feel right to me, so the project became another UFO.

Now that a few years have passed, I've learned a lot about how to deal with the ends on the back, and suddenly the project seems a lot easier.  I realized that it can be my elusive "tv project."  I am so far behind on Coronation Street!  CBC only keeps the last three weeks online, and I have been missing episodes because I have nothing to do while watching them.   I spent most of yesterday tracing new blocks, and I have 3 left to do today.  I am also stitching the label for Edward's quilt, so there is a lot of outlining in my future.  Which is good, because I think Audrey and Mark's secret is about to become the talk of the neighbourhood!
Posted by Monica at 11:29 AM