Since December, when I decided to commit to the TQS 2012 BOM, Sedona Star, I have been debating how to handle the points in the Month 2 blocks: 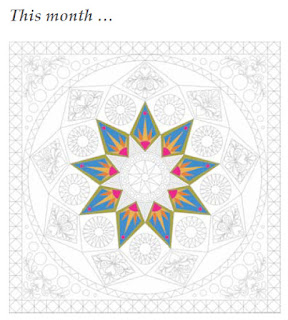 The instructions call for raw edge, fusible applique, but I don't much like raw edges, or fusibles either.  My applique plan for the quilt has been to use Beth Ferrier's technique for turned applique by machine.  I have a comprehensive review of that technique coming up!

The centre point on the Month 2 block is very sharp, though.  I know I could do it by hand, because you would sew one side first, and then stuff all the seam allowances against it as you stitched the second side.  But there are nine large blocks!  I thought about machine sewing part of the point and hand sewing just the end, but it seemed very complicated.

I briefly considered converting the block to paper piecing, but I saw problems with that.  However, one of the other TQS members, FLAero52, did it, so I was inspired to try too.  It is NOT EASIER.  There is a lot to figure out, and I did it a little differently than FLAero52.  Here is my practice block: 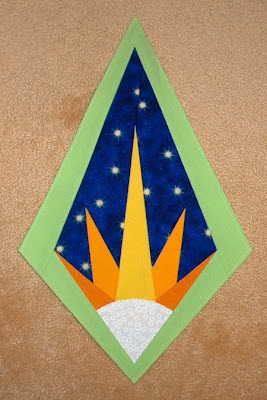 There are a few problems with it, but they are fixable, so this is how I'm going to proceed. I am very happy with the points.  Another benefit of paper piecing is that the dark blue background fabric won't show through the light appliques.  I love that fabric - it's actually a blender from the Elvis on Tour collection!  The white dots are spotlights.  :)

I'll show you how I revised the template to accomodate paper piecing tomorrow.  For now, though, here's some of the problems that I need to address: