Cross Stitch Without a Frame

I am so, so far behind with my blog posts!  I have been busy but disorganized.  Now, though, I am going to start catching up!

I have been going through a cross stitch phase again recently.  Celtic Spring kind of ground to a halt around late February when I filled up my 11" x 17" Q Snap frame and debated the best way to proceed from there.  Up until a week ago it looked like this: 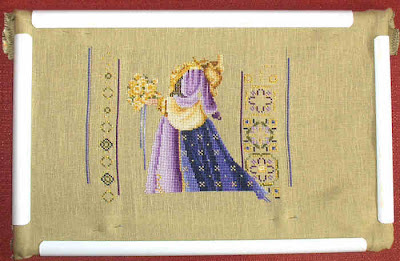 In the past I would have done a large project like this on a scroll frame.  However, when I discovered Q Snap frames I swore I would never go back to scroll frames.  Scroll frames are so heavy, and I am constantly either banging my arm or catching the thread on the knobs.  With my dodgy back I have to lean back in my chair, so I can't use a seat or floor frame comfortably.  This project does fit into a 17" x 20" Q Snap frame, but the frame was so big I couldn't fit my arm around it!  So as an interim measure I put it into this 11" x 17" frame which was easier to manage.

Once I started using the metallic gold thread and I realized how important it was to maintain the crinkles in the thread, I started to worry about what would happen to the gold thread when I had to move the frame over the already stitched areas of the work.  I thought about doing a test patch, but I never got around to it.  While I was dithering about that I decided to work on something easier: 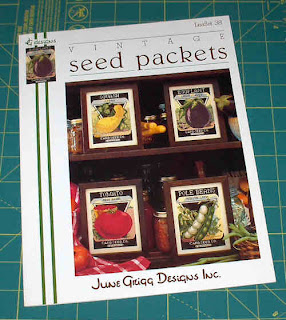 This may well be the first cross stitch pattern I ever bought.  I bought it back in the mid 1990s from June Grigg herself.  She and her husband had come all the way up from Atlanta to Toronto to have a booth at the Creative Sewing & Needlework Festival, which is now called the Creativ Festival.  I remember because they were both very nice.  It seems to me that the festival used to be more fun back then, with a wider range of vendors.  It was before Christmas, and I think it was held in the old Automotive Building at the Ex.  The whole place was strung with white fairy lights above the vendor stalls.  My friend and I went up to the mezzanine where you could look out over the lights and the entire festival - it was quite a sight!

These patterns have always been reasonably high on my cross stitch bucket list, but when I had another look at the leaflet last fall I worried that the large flat areas of colour might be too boring.  Then I realized that sometimes easy is a good thing, so I went ahead and bought the materials.  Another tv project!  I put it into a small Q Snap frame.

What I discovered, though, was that stitching the 18 count aida actually took more concentration than I wanted to give it.  For some reason, when I did my Kittens project on 18 count last fall I didn't notice the concentration needed to make the stitches, probably because I was already concentrating a lot on the counting.  The whole thing was feeling awkward, and I was remembering how much easier my redwork became when I took it out of the hoop, so I took the plunge. 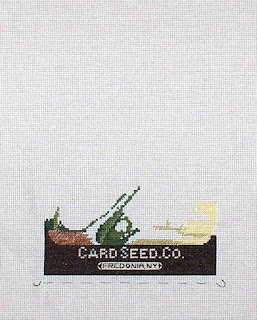 I have gone on for long enough now, so I'll show you how this worked on the linen evenweave of Celtic Spring tomorrow!

Tips for stitching with metallic thread

Redwork out of the hoop
Posted by Monica at 9:30 PM