Recently, it seems like all my Australian blogging friends have been knitting, which is natural for them because it's winter there, but it's put me in the mood for knitting too.  Since I became so allergic to wool, all my wool knitting projects are semi-permanently on hold.  But I do have some cotton lying around.  Webs had a sale on Debbie Bliss Eco Aran a year or so ago, and I snapped up enough for two projects from the Debbie Bliss Eco Fairtrade Collection book that came out in 2009.  I am starting with colour 616, the powder blue: 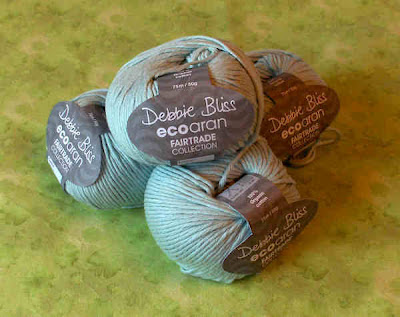 This is kind of a challenging yarn to work with.  It has several thin plies loosely wound together, so you have to knit carefully to make sure you catch them all in each stitch.  I also found two flaws just in the first ball, which is a pain because then you have to back it up and find a good place to hide the join.  But, I have concluded that it is worth it, because the knitted fabric feels fantastic.  It is very soft and plush, unlike a lot of cottons which can be stiff.

I'm making the Paisley Sweater from the back of the first Eco Fairtrade Collection book: 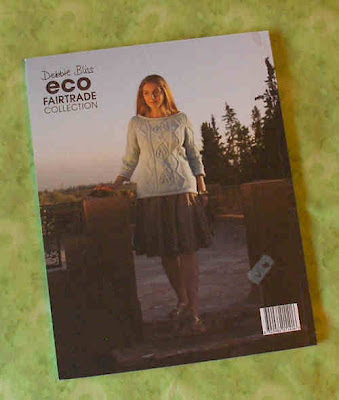 I don't have much to show yet, because I've had two false starts.  The first time was a tension problem, and I've reduced the size of my needles.  Even though I was knitting to the gauge, the garment was coming out bigger than the pattern suggested.  I met a woman at a quilting workshop who had made one of these projects, and she mentioned that she found she needed to knit this very tightly.  I don't like to put so much strain on my hands, so I have gone with smaller needles.

The second false start occured when I realized that the project was going to be too long.  The front measures 26" long, but when you realize that it isn't 26" from the top of the shoulder but rather from further down, the whole thing became longer than I wanted.  So I decided to shave off 18 rows, which required me to re-jig the placement of the cabled panels, and I had to start those over.

But now I think I'm headed in the right direction.  It is really great to be knitting again, it feels like visiting an old friend.
Posted by Monica at 9:55 AM