It's taken me a while to organize my thoughts about this border.  I finally realized that it has to be divided into two posts.  So today I'm going to talk about how I came up with the design.

Susan Stewart's amazing quilt "Radiance" won the Bernina Award for Machine Workmanship at Paducah this year.  In this interview she describes how the whole quilt was inspired almost in a flash from one machine embroidery motif.  When I watched it I thought "that's what happened to me!" with my Hen Party quilt.  But now that I am writing it all down, I've realized that's not really true.  The idea for the centre of the quilt came in a flash, but the border took quite a bit of extra thought.

As I've said before, the original inspiration came from the quilt "Peach Cobbler" in Better Homes and Gardens' Sew Scrappy, vol 2, that was published in late 2011.  I took a photo of a corner of the original for you all:


You can see that the designer carried the triangles out into the 2" strip border, and then finished it with 4" squares.  I am a big fan of carrying the block design out into the border, although I intended to complete the diamonds rather than leaving them unfinished.  But I couldn't get it to work with my fabrics, especially when I reduced the size of the blocks.  I thought about using florals in the border instead, but then the border lost all relation to the centre of the quilt.

One day I was looking through the instructions for Sue Garman's "Ruffled Roses," the TQS BOM from last year.  One of her borders caught my eye: 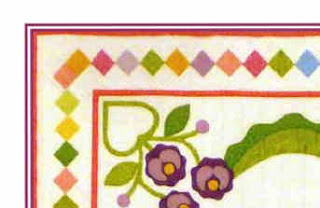 Some time after that I found myself doodling the same border around my Hen Party quilt.  I wasn't concious of the source then, but now I am pretty sure this is where it came from.

With the 1 1/2" corner triangles in my snowball blocks, the cream and brown diamonds that are created finish at 3" high.  I wanted the diamonds in the border to be the same size, and fortunately the math worked out well.  Squares with 2 1/8" sides will measure exactly 3" on the diagonal.  So I decided that Seminole piecing would work well for the borders.

I thought, actually, that Sue Garman also used Seminole piecing in her quilt, but now I see she used four patches:

This image was probably what set me on the track of Seminole piecing:

Isn't it interesting how we pull together inspiration from different sources to make something new? Well, I'm pretty sure several books have already been written on that subject, so I'll stop here.

In any case, the Seminole piecing worked great, and I'll show you that next time!
Posted by Monica at 9:00 AM