Today is my mom's 75th birthday!  Part of the reason my blog posts have been scarce recently is because I've been secretly working on her birthday present.  It's a lap quilt, although once the borders are added it will be up to 70" square.  Here's the centre: 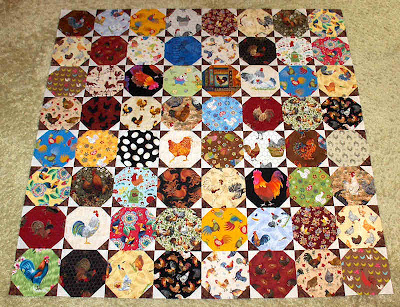 I wanted to get the whole top done before today, but I didn't quite make it.  The borders are done but not sewn on.  I hope to get it all assembled by the end of the week.  I make no promises on when it will be quilted...

I got the idea for the quilt from a pattern in the last issue of Sew Scrappy magazine, which I reviewed back in January.  I have modified it so much that I think you can call the design original now.

The quilt in the magazine used 8" snowball blocks, but when I looked at the scale of my fabrics I thought that 6" blocks would be better.  You can see that the larger chickens are framed perfectly.  There was a LOT of fussy cutting!  Even the smaller chickens were fussy cut so that no heads were cut off, although there is one block where I couldn't avoid it.  I will try to do less of that in future!

My original plan was to do the corner triangles in black and white.  I worried though, that such a strong contrast might distract from the chickens, so I opted instead for brown and cream.  The contrast is still strong, but they blend quite well with the other fabrics.  So I am happy with that choice.

I'll show you the construction over the next few days, and hopefully by the end the top will be finished too!