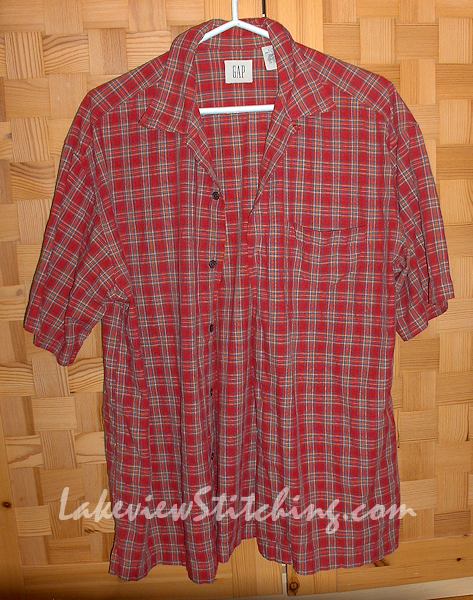 Back in October I rescued this shirt and another from my Dad's charity donation pile. I never saw him wear it. I think he really doesn't like plaid, but I love it! It's pure cotton with a textured weave in the solid red squares. "I'm sure I can do something with this," I thought. I put it in my washing pile and waited for inspiration to strike.

Less than two days later lightning struck and I thought it would make some super cute houses. Didn't I see something like that somewhere? Yes! Over at Paulette Doyle's Sweet P Quilting and Creations blog:


You can still see it in Paulette's sidebar, and she tells me it hangs with pride over her fireplace at home. Paulette's is wonderful with all the different reproduction fabrics, but I thought it would also look good in just two fabrics -- the red plaid and solid white. 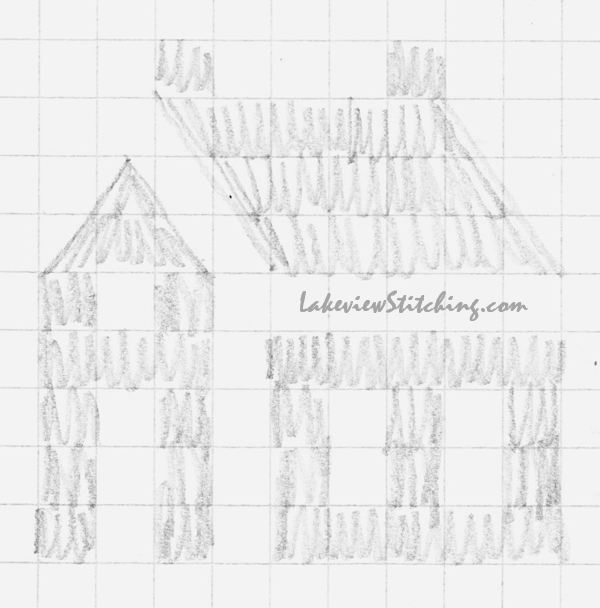 There was no way I was going to piece 1/2" strips from templates the way Paulette did, so I knew foundation paper piecing would be the best plan for me. A while ago I showed you my low tech method for drafting foundations with 1/4" graph paper. A few months later I read how Sue Garman uses the draw function in Microsoft Word to make her foundations. I have Microsoft PowerPoint, and I thought that would be even easier. It was! 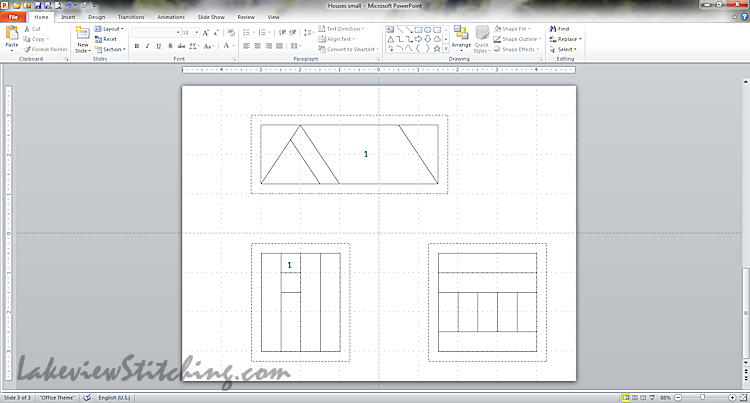 You can set PowerPoint to "snap to grid" at 1/8" intervals, so it was easy to draw all the lines exactly where they needed to go. I printed out 9 copies on my Carol Doak Foundation Papers (which I quite like), and set them aside for the next day. "I bet I can finish the whole thing in one day," I said to myself. (Yes, I really said that.)

The next morning I cut apart the three units to get ready to start piecing, and I thought, wow, these are really small! Out came my ruler and sure enough, they were quite a bit smaller than they should be. It turns out that PowerPoint doesn't print to scale. Argh!

I saved the file in .pdf format and printed it again using Adobe Acrobat. It's still a little off, but close enough for this project. But it wouldn't work if you are combining paper piecing with traditional piecing. Acrobat usually prints perfectly, the problem lies with PowerPoint. So, NO, PowerPoint is not a good solution! I'm not sure how Word will behave for me, but I am going back to my tried and true graph paper.

(Update Feb. 2014 -- Actually I think PowerPoint does work. The trick is to save the pdf in Standard Publishing Format, not Online Publishing Format. I'll post a correction to my method soon!)

With that problem out of the way, I merrily started to sew. I had watched the Carol Doak video when it was available on The Quilt Show and I learned a couple of useful tricks. She production sews the same piece on several blocks at once, so I decided to do four in the first batch, and five in the second. I know I could have done all nine at once, but I wanted to give myself some leeway in case something went wrong.

Sharp paper piecers out there may have already caught it: 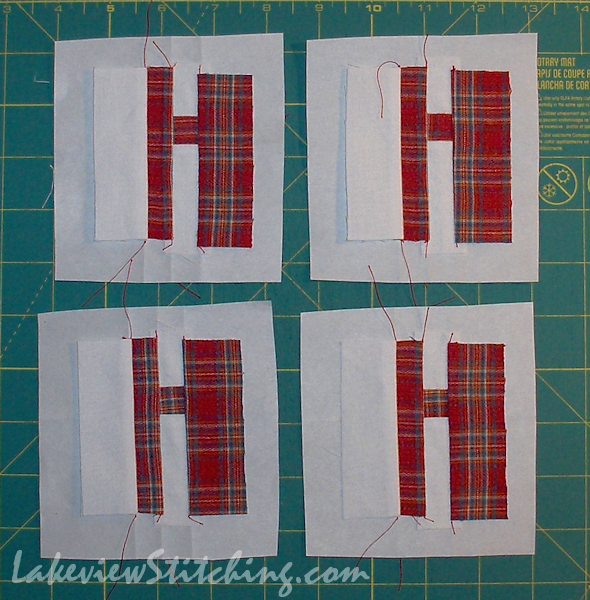 When you paper piece on a foundation, the finished block is the mirror image of the printed side. Everything I'd paper pieced before had been symmetrical, so I forgot to "flip" the image. My houses were going to face the wrong way! Noooo...

It's a cliffhanger! Read the next instalment right here.
Posted by Monica at 11:57 AM