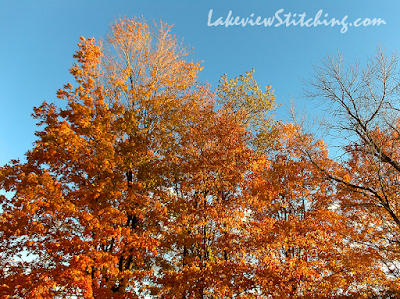 Here's a shot of our maples in the late day sun last week. It was windy, which is why it's a little blurry. This week it's been either sunny and windy, or dark and rainy, so this is the best I've been able to do. This year their colour has been the best ever, which I think is partly due to the dry summer. But mainly I think it's because they are getting a lot more light since we cut down the ash trees that were damaged in the 2013 ice storm.

The moon was up early too: 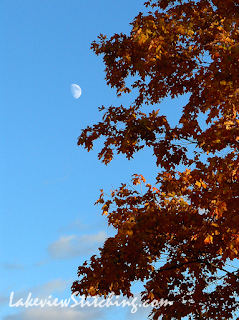 Yesterday it was really dark all day, so I was happy to be inside and working on my next batch of improv letters: 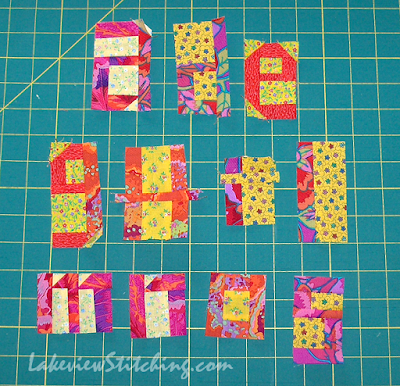 I was going to put them together today, but here I am blogging instead, so it may not happen!

I also decided this week to see if I can add a leaders & enders project into the mix. Bonnie Hunter has a good description of the process here. I've avoided an L&E project up until now, because I didn't want to sacrifice the quality of my main piece by being distracted by a second project. But with all the short seams in this project (and also in My Country House), I've been using up a lot of thread anchors, so I thought I would try it.

For about an hour I wondered which new project I could start that would be appropriate, until I remembered my hourglass quilt! I ran out of steam on this project in early 2014, because it is super boring. But, boring is perfect for an L&E project, because I don't want to have to think about it at all.

I still need at least 300 more hourglasses, and all the fabrics are already cut and marked. I set up the rest of my lights and darks, right sides together, and piled them up: 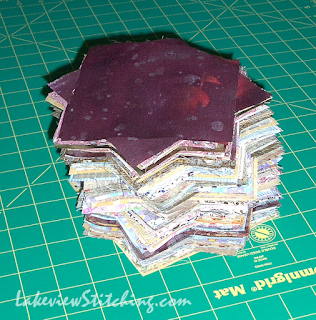 So, can I improv and sew leaders and enders at the same time? Yes! In fact, with all the small fiddly seams on these letters, it was a relief to put in an hourglass set and just rip down the middle of that. Somehow it feels more balanced. At the end of the day I had the first two seams done... 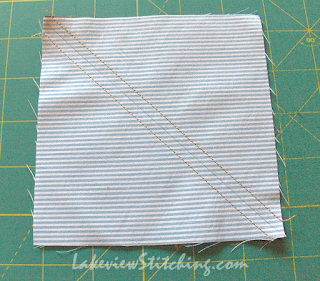 ...on 23 hourglass sets (which will be 46 hourglass blocks). It feels really good to get that project moving again. Hopefully this will be a painless way to eat up a lot of the preliminary work on this project.

I admit I've been having one of those "what was I thinking?" moments, about my decision to make this a queen-size quilt. Sure, the hourglasses are easy to make, but I really didn't think much about how long it would take to sew them all together as well. Now I'm starting to think about that too! Hopefully I can do at least some of that in L&E fashion as well. I'll keep you posted!
Posted by Monica at 2:28 PM