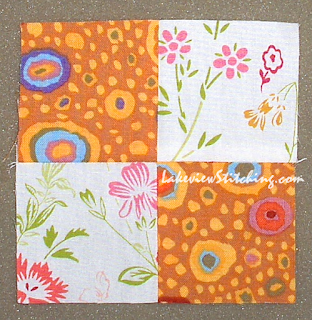 Well, it's Thursday, not Monday, but Week 3 of Bonnie Hunter's 2015-16 Mystery Quilt, Allietare, is now wrapped up! I had hoped to spend last Sunday finishing the remaining four patches, but I developed some tendonitis in my shoulder. I've found the best cure is to do nothing at all, which is challenging, but it worked and I am better now.

It seems like I get this every year at this time. I used to think it was from hand sewing, but I've realized that it's the computer that's the problem, and sewing is just the collateral. Then I wondered, why do I spend more time on the computer at this time of year? I realized the answer is too much online shopping! So there's a lesson in there somewhere. :D 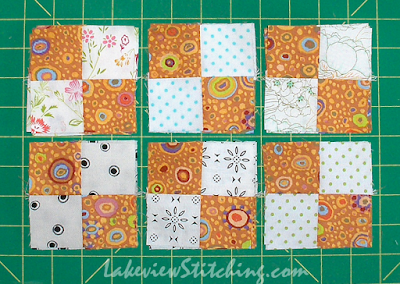 I was happy to be working with all the Kaffe golds, ochres and umbers this week. They were my main inspiration for this project, so it was nice to finally use them. A lot of Kaffe's older designs used this palette, so I've been using up some long time stash inhabitants... 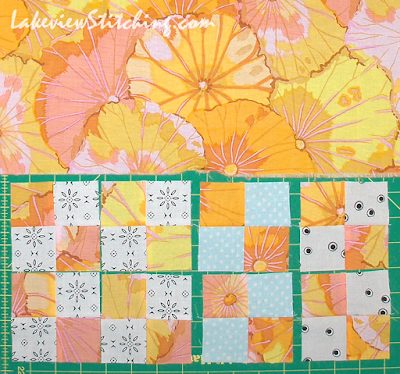 ...like this gold Lotus Leaf. I love that combination of gold with chalky pink! I bought most of these in long quarters (9" x 42"), and they were a tangled nightmare to wash. They all frayed down to about 8.5". I'll never buy a long quarter again!

For this week's clue, where all the cuts are multiples of 2", it made the most sense to cut across in short 2" x 8.5" strips. And with a tricky large print like this, I thought it would be easiest to manage if I made the four patches from the same two fabrics, rather than random fabrics like Bonnie suggests. 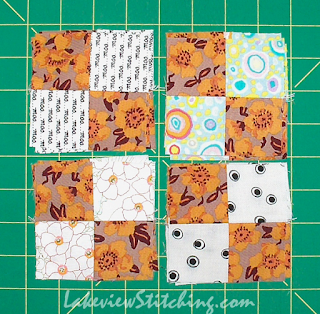 So they just naturally came out in matching sets of four. Maybe I can do something interesting with that down the road, maybe not!

I had hoped that we would be sewing the golds together with our constant fabric, which is my blue batik. The blue would have helped my browner fabrics seem more gold: 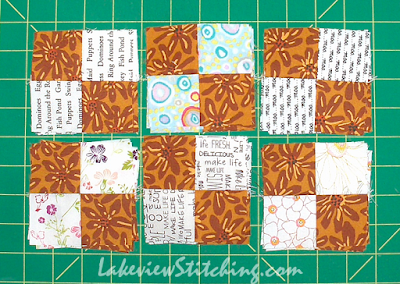 We're only halfway, so I guess there's still time for that! 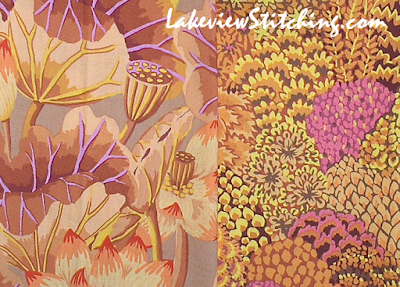 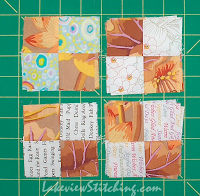 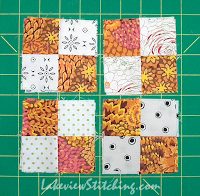 I think I missed the boat on that aqua and taupe four patch on the left there. But otherwise, the big prints work as long as there is enough contrast between the fabrics.

Last time I forgot to show you my black squares... 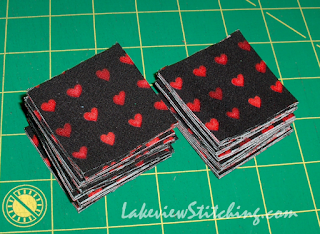 ...which I decided to cut all from the same fabric. I didn't have a lot of suitable black in my stash, so most of it will be from this red hearts fabric. It just seemed easier to cut them all the same.

This week we had to cut 36 large light rectangles, and I decided to cut them all from the same fabric too: 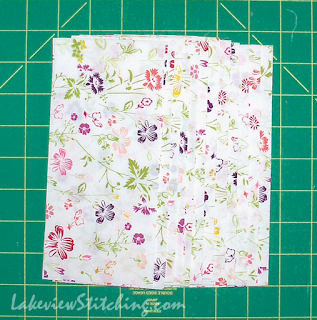 They feel like they will be sashings or borders, so I think that will look good.

And finally, last week I finished the first step on all my hourglass leaders and enders. Now I've started on step two: 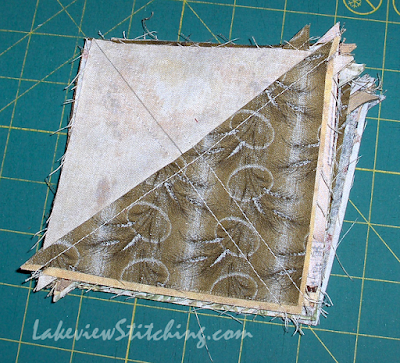 I'm amazed at how fast this moves along! I had 300 or so sets left when I started in late October. At this rate they could be done by the end of January, with no extra effort at all. In fact, I miss them right away if I sit down to sew and I forgot to take them out. Now I'm thinking of a new project for when these are done.

The Week 4 Allietare clue comes out tomorrow, and I think a reasonable goal will be to finish it by Thursday, not Monday! My Week 2 post was too late for the link up, so if you missed it you can find it here. And of course, you can see everyone else's Week 3 results right here. We're half way, and I seem to be sorting out the challenges and keeping up, so, woo hoo! Bring it on. :D
Posted by Monica at 4:39 PM