After many years of resistance, this week I succumbed to the Rainbow Scrap Challenge for 2017 (RSC17). My inspiration is Angela Neff's rainbow version of Bonnie Hunter's Talkin' Turkey quilt. Angela started hers in 2013, and the flimsy is here, in 2016. Sounds so familiar, doesn't it?

But, despite overwhelming evidence to the contrary, I still believe that I can start halfway through the year, catch up, and finish by December 31!

I have not one, but two copies of the pattern: 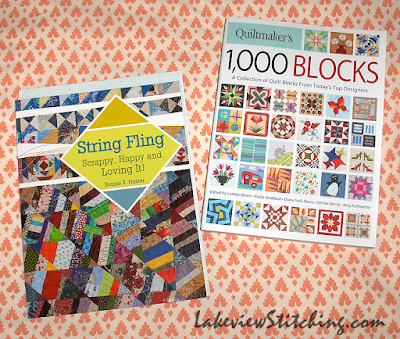 So, the block should be a piece of cake, right? Well, I have to admit that I mainly buy patterns so that I can take a photo for the blog and support the designer. I don't need a pattern for a traditional block...I skimmed the instructions and jumped right in.

The RSC colour for June is yellow, and my plan called for four yellow blocks. The centre nine patches went fast... 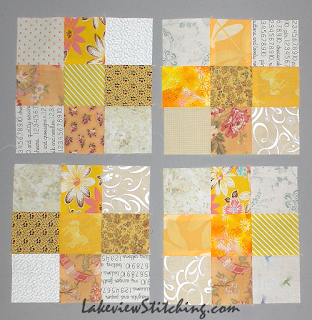 ...and then things started to go awry. I used Stable Stuff for the string foundations, with the plan to leave it in the final block. I have no photo, but this is exactly what happened. Déjà vu! Stable stuff is a pain to remove, but, I did it.

Then, I thought I would save a step and trim the string blocks after they were sewn onto the middle. The pattern said that I should have about a 1/4" extra all around. So why were my blocks coming out scant? Something must have happened with that Stable Stuff and all the ripping and ironing I had to do. I kept going, and with plenty of steam and firm ironing, my block finished just 1/8" short all around.

In the middle of that, my big iron died, and I had to press the last seams with my small travel iron.

At least I got one block done! I put everything away for the day. Then I thought, no wonder it was tricky -- those 6" nine patch blocks are 8.5" on point, not 9" like the pattern says. It must be a mistake! In both books?

I re-read the pattern. The instructions say to cut the nine patches at 2 + a fraction inches, and I assumed that fraction was 1/2. It is not. 2 1/2" is too small, so my nine patches were too small, and the whole block was doomed. Is it finally time to get eyeglasses?

The other three blocks were already cut, but I was able to sew a scant seam, and they came out right. The first, problem block is on the top right: 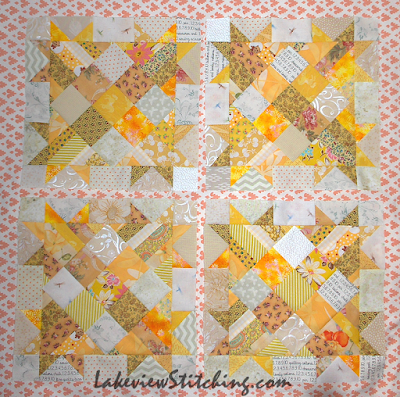 I'm lucky that the yellow is low contrast, so the problem is not obvious. I'm keeping that block! But, now I have about 100 beige 2 1/2" squares for a future project. Back to the cutting board!

Usually when I run into this many problems, I think that maybe I should pass on the project. But this time I am not deterred. All the problems are solved now, hopefully. I only want 36 blocks, and I think around 7 a month should be doable.

And you know, my old iron wasn't doing a great job with all the fusible applique anyway. I was constantly finding little unfused areas that were probably left by the steam holes. A new, flat-bottomed dry iron is on order!

Best of all, I've remembered that I start thinking I need glasses every June. Why? This dratted tree:

The city has planted these everywhere, they are all in bloom now, and my allergies are in high gear. By mid-July the world will be clear again.

So obviously, this was all the trees' fault. Certainly not mine.

For many other yellow blocks, and probably shorter stories too, check out the RSC link up, right here.
Posted by Monica at 5:59 PM