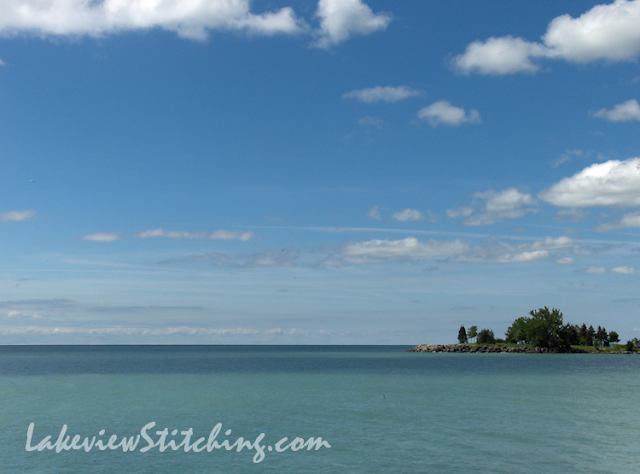 Doesn't look like a lake, does it? That's Lake Ontario, looking southwest down the length of the lake from Bluffer's Park in Toronto. We've had some wonderful high summer weather this week, and I took my camera out for a drive.

Here are the Scarborough Bluffs, with lovely puffy white clouds (aka source material): 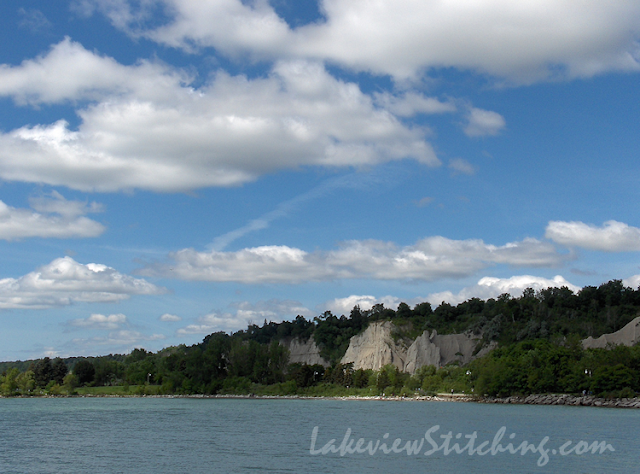 And the marina, with puffy clouds and shiny boats: 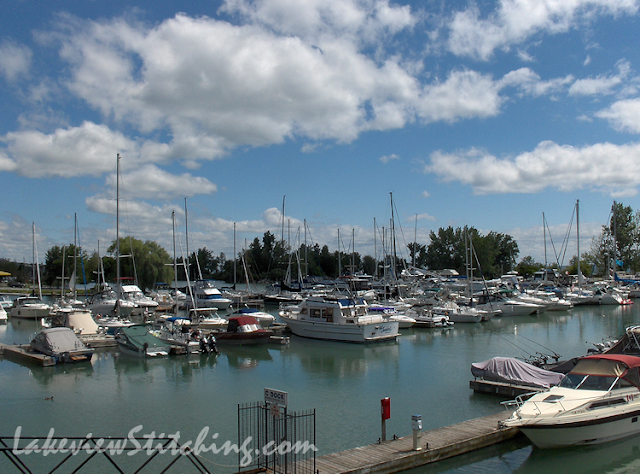 A good day! Some memories to re-visit when it's below freezing this winter.

Inside, I finally finished edge stitching the fusible applique blocks that I last shared in June, here and here. They are for my quilt "El Camino SoCal," based on the cover quilt from Nancy Rink's book El Camino Real. And even though summer is still in full swing, you can see that my sunny patch on the wall is getting narrower: 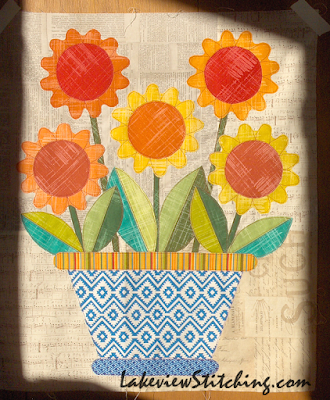 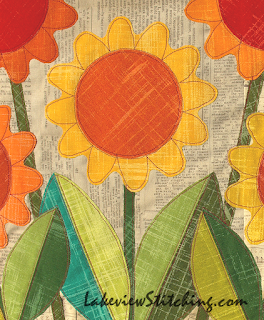 After considerable thought, I decided to top stitch the flowers as if they had individual petals. It was a lot easier to run straight and pivot, rather than inching around all the inside curves.

I want this quilt to have a bright, casual feel, so I just stitched the petals by eye. 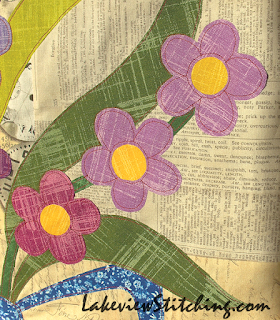 I did the same thing on the smaller "forget-me-nots."

The yellow (and citron) centres are reverse applique, which is why the top stitching is only on the purple. 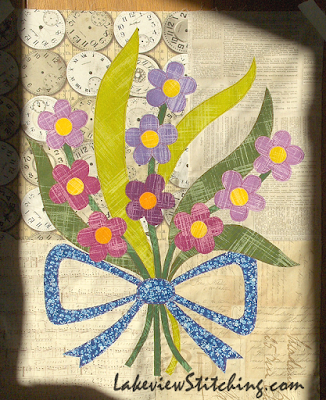 And the last block of the five I've done so far: 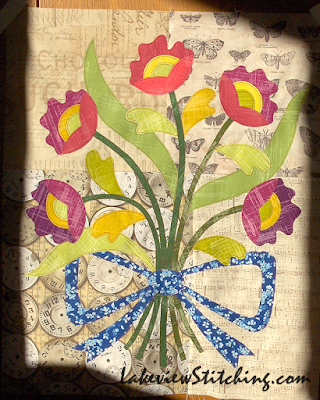 They remind me of poppies. 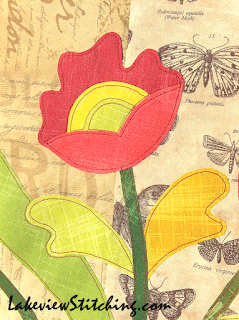 I think this block benefited quite a lot from the top stitching. It really helped to separate and define all the light coloured leaves.

And I'm still happy with my choice of dark red thread for all the edge stitching. It shows up well on every colour.

These blocks have been lying flat on my sewing table for two months, because I didn't want to fold them until they were stitched. I've had to move them every time I sew. Now I can finally put them away!

I feel like I'm at a bit of a crossroads now, and I'm not sure which project I'll pick up next. It's been nothing but this project and Technicolor Turkey for two months, so maybe it's time to give some love to some of my other projects!

And the next Ad Hoc Improv Quilters challenge is to use words in a quilt, which is right up my alley. You can read about it here. I have at least three wordy ideas that I've been sitting on, and I thought it would be easy to just pick one. But...I'm feeling the need to be more spontaneous. So we'll see what happens!
Posted by Monica at 10:37 PM 19 comments: 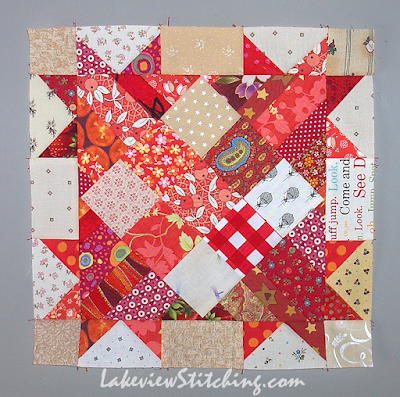 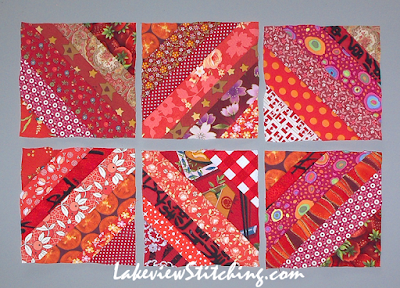 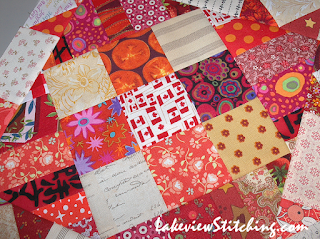 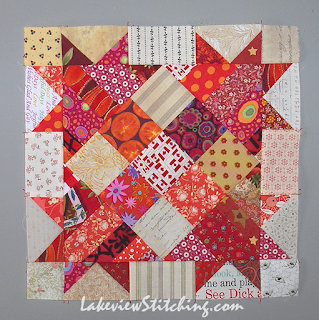 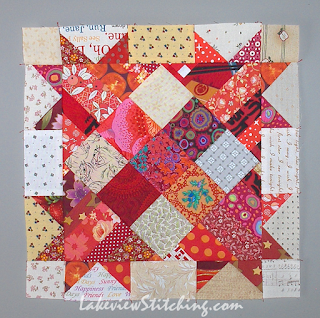 But for now, don't forget to check out all the other blue blocks still being made for RSC in July, right here.
Posted by Monica at 3:30 AM 27 comments: 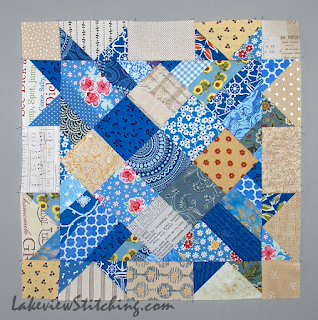 The Rainbow Scrap Challenge colour for July 2017 is blue. My three blue Talkin' Turkey blocks for my Technicolor Turkey quilt are done!

My stash is mostly sorted by colour, and I have to admit that I don't open my blue box as often as I should. I found a lot of goodies in there! Even though I have a lot of fabric, I still remember where and why I bought almost all of it. But there were a few that I truly had forgotten. 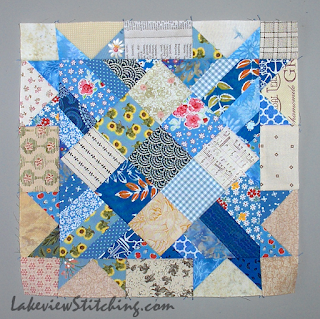 See that gorgeous batik with the orange leaves? My best guess is that I must have bought that on a whim at a show somewhere. I used to always buy fabric with a specific project in mind, but I cannot remember any plan for that one.

And the fabric with the little sunflowers? I also have that in sage green, which tells you something about its age. Those are also probably from a show. I always buy sunflower fabric when I see it! 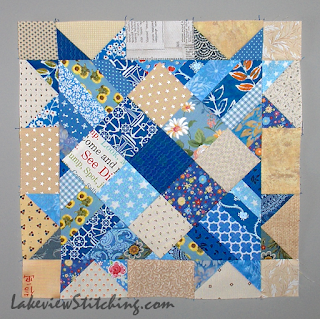 Anyway, three blue blocks are all I need, so I think that next time I will keep catching up on the months I missed, and go back to red for March.

In the meantime, there is plenty more blue in the RSC link up, right here.

Have a great weekend!


The RSC17 colour for February was aqua, but I pulled a wide range of blue greens from light sea green and aqua through dark turquoise and teal for my Talkin' Turkey blocks. Recently I have been a lot more mindful of the benefit of using a full range of values in my projects. Well, since my water lily misstep, actually. Katie Pasquini Masopust recommends a 7-step value scale for the projects in her book, and around the same time I saw an episode of Quilting Arts (Series 18) on PBS where one of the teachers had a 7-step scale made from paint chips. That seemed like a good idea, so now I have these:

Technically, the white should probably be pure white. But then I thought, how often do I use pure white fabric? Or pure black. Anyway, it is a work in progress. But, the point is that I used to think in terms of a 3-step value range, light - medium - dark, and I've realized that a project looks much fuller and well rounded if you use more gradations. Even in a scrappy block like Talkin' Turkey! 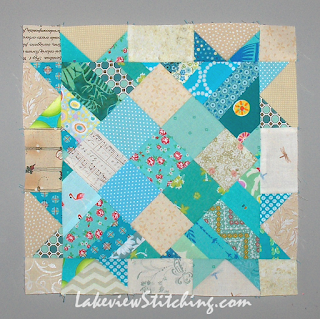 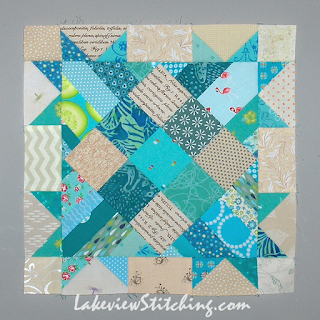 And since RSC17 will include a "light" month and a "dark" month, both still to come, I'll definitely be able to use all 7 values in the complete quilt. I think it will pay off! 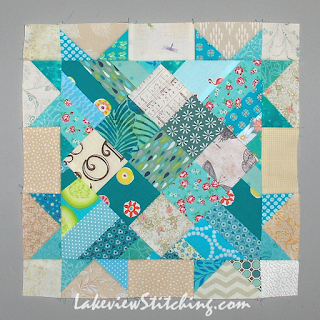 And, with all this 7 step practice, I'm hoping my next attempt at the water lily will be more successful! 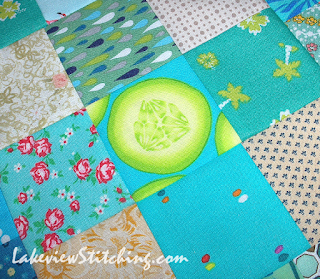 Of course, I'm still up to my old tricks in this quilt too. It was impossible not to fussy cut this slice of cucumber, left over from Picnic. 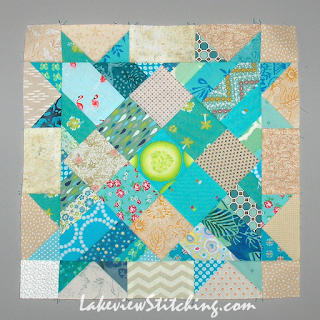 Maybe it would have been better off centre? Something to consider next time. I think I still have a piece of cucumber saved for the green blocks, too. I hope so! 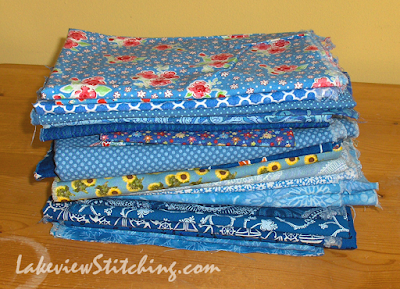 Right now, though, I'm going to start work on the colour for July. So, it adios to aqua, and bonjour blue!

To see all the other RSC blue projects this week, click right here.
Posted by Monica at 3:30 AM 28 comments: 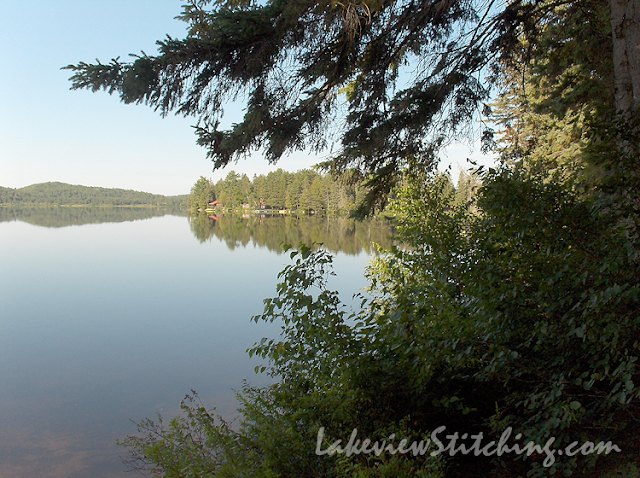 Happy Canada Day to all my Canadian readers, and anyone else who feels like celebrating too! No quilts today, just a slice of summer vacation in the Canadian Shield. The photo above is an early morning shot of Lake of Two Rivers in Algonquin Park. You may hear a White-throated Sparrow...


...but you don't usually see them, they are high in the trees. And there is nothing eerier than hearing the loon echoing over the water:


There has been a lot of discussion in the media this week about what makes a typical Canadian experience, and the truth is that there isn't one thing that fits everyone across the board. Everyone has their own customs, and most people are ok with that. 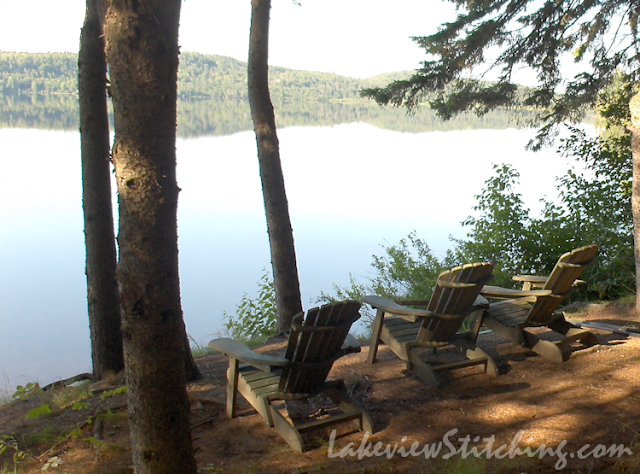 For one version of the Canadian experience, you may, if you like, imagine relaxing in a Muskoka chair by the lake (they are extremely comfortable), breathing the crisp air, and drinking a nice hot cup of coffee. (We learned this week that Canadians are the third highest per capita consumers of coffee in the world, after The Netherlands and Finland, and before Norway and Sweden.)

I will almost certainly be sewing on Canada Day, and I'll be very glad that I am free to do it, too. And despite my earlier post, I don't think I'll take a blog break any time soon. I have lots of motivation these days. Maybe I'll slow down in August. But for now, enjoy your weekend!
Posted by Monica at 12:00 AM 11 comments: