So, I didn't take any of my planned breaks last year, and now I've been on an unplanned break instead. I am fine, it was my dad who went into the hospital with pneumonia earlier this spring. The following day we were met with a phalanx of social workers, and a host of pitying looks from all the staff. They sent him home. His dementia makes him extremely volatile, and they were happy to see him go. Of course, we had to get him settled again. The pneumonia is gone, thanks to the pneumonia vaccine he had a few years ago. And he is relatively steady now, so this week I've actually been sewing.

This little project below has been a finished top for six weeks. I used Ann P. Shaw's pattern Barnyard Queen, and I call mine Sunset Queen: 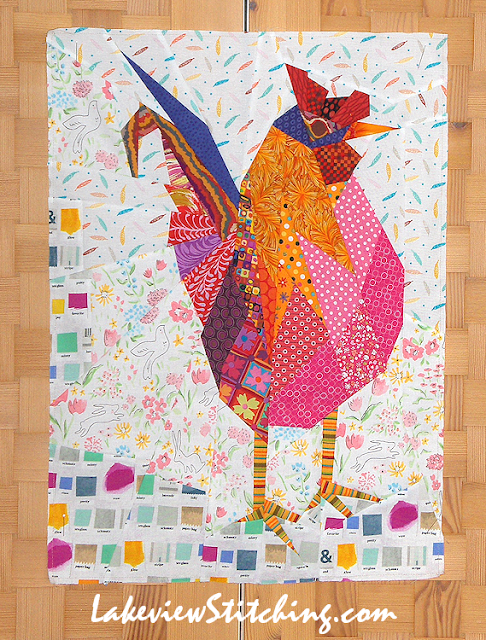 Ann is carrying on as the authorized teacher of Ruth McDowell's freezer paper piecing technique. For my first try, I liked the idea of a full sized pattern and a forgiving subject like this. I did alter the background and one of the legs slightly to give her a more forward stance. I found the method was very logical and well explained. You are on your own though, when it comes to choosing fabrics. But, I like that part, and it helps to have a big stash. The eye was a lucky find in Kaffe Fassett's brown Jupiter, which is also the long stripe in the tail. Basically it was an excuse to play with fabric!

I may or may not do one of the roosters, too. It was just the right degree of challenging. This week, though, I've been back to my UFOs, and this is the first photo of fabric I've taken in weeks: 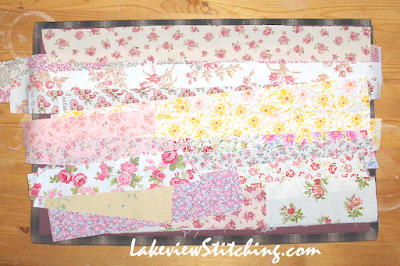 Exciting, eh? Those are strings for the alternate string blocks in Rose Boll. I started them last summer, and they are slow going. I'm only about half way through, and I've expanded the strictly beige palette to include pink and yellow, just to keep myself motivated.

I've also dusted off (literally) my RSC 2018 project, and I plan to share the first step soon. I've read no blogs at all for months, so I hope you all can forgive me. It's going to take a while to catch up!
Posted by Monica at 5:28 PM