Well, there was much beating of brow and gnashing of teeth around here last night, followed by deep philosophical sighs.  After a day and a half of steady knitting, I got this far: 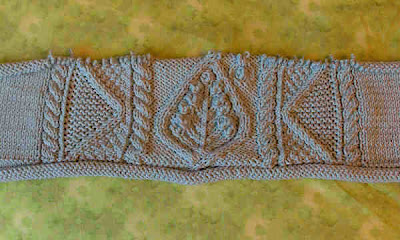 You will notice that it is off the needles.  I realized that it is now going to be way too short!!  What has happened is that my rows are coming out narrower than the suggested gauge.  So in fact, I didn't need to reduce the number of rows at all.  Fortunately I bought extra balls of this yarn.  I am just going to start over, because some of the yarn near the hem has already been re-knitted twice.

You know, I do usually make a swatch before I start a project, but that is because I have either substituted the yarn or made my own design.  In this case, because I am using the yarn called for by the pattern, I guess I didn't think I'd need it.