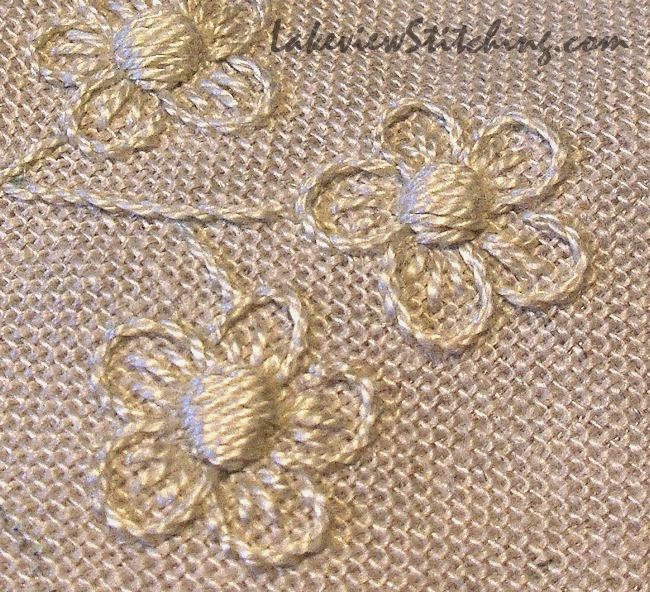 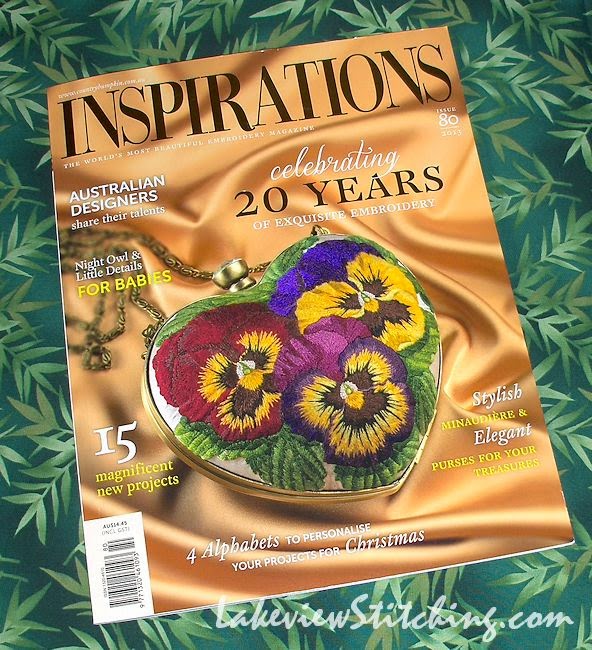 In early January, while I was busy with my little Highlands Houses project, the 80th issue of Inspirations magazine finally arrived at my house. I'd begun to think it had been lost, because it must have been two months in transit. 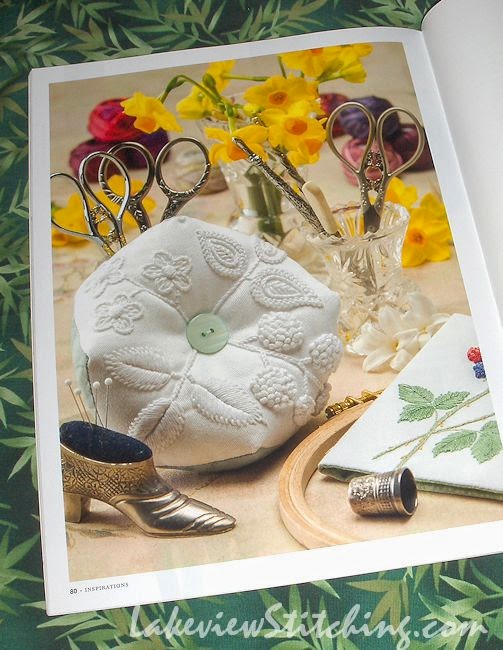 I was immediately enamoured of Yvette Stanton's Snowberry biscornu, which uses a variety of traditional Mountmellick stitches on white jean fabric. I realized that I could adapt it to my current needs with supplies that I already had on hand, and I started it right away! 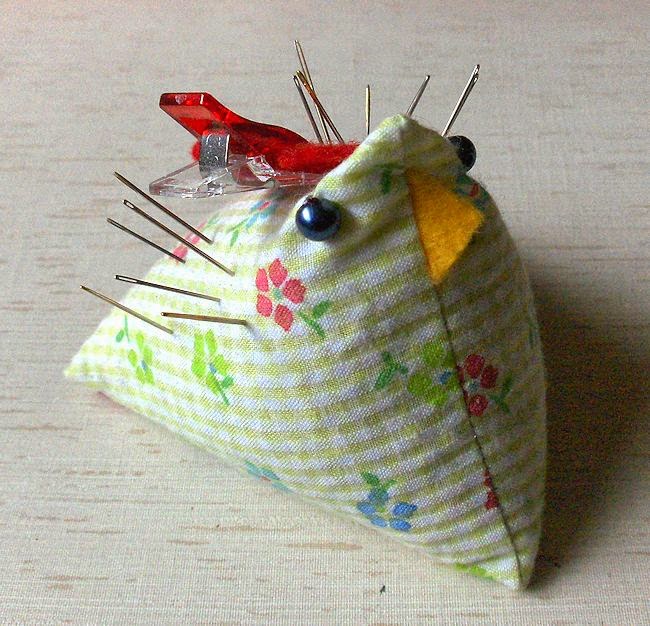 I wanted a general purpose pincushion to replace this poor chicken, which I bought to support Quilts of Valour at the Trenton quilt show a few years ago. Somehow I always feel bad about sticking needles in animal-shaped pincushions! But, he has been extremely helpful, because the fabric is loose enough to hold both embroidery and tapestry needles. 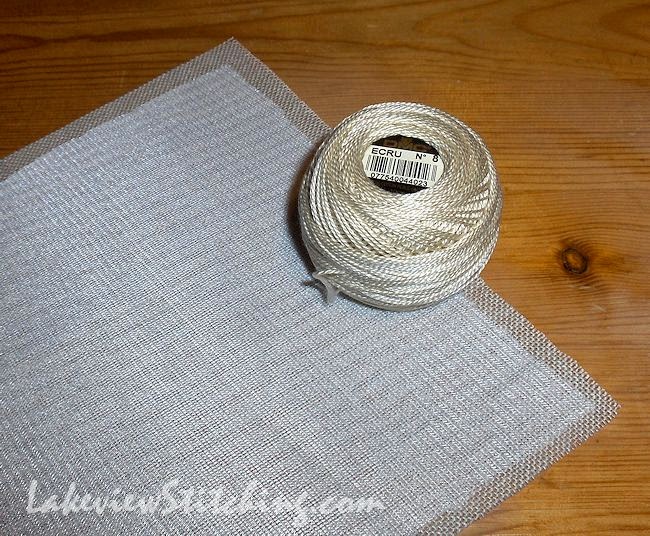 I didn't have any Mountmellick thread or white jean in my stash, but I did have some leftover pieces of 28 ct flax-coloured Cashel linen, and a ball of No. 8 perle cotton in ecru, which I thought might work instead. I stabilized the loose Cashel linen with a knitted polyester fusible interfacing, which has been working very well.

I like that my old chicken is fairly compact and doesn't take up a lot of space on my side table while I sew. That's prime real estate! So I reduced the Snowberry biscornu design on my photocopier from 4 3/4" down to exactly 4". While I was at it I changed the number of berries from five to three, to make the whole thing more symmetrical: 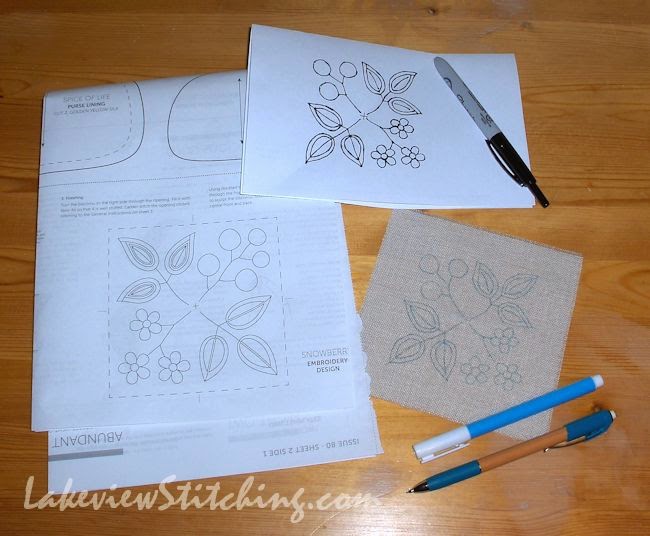 I drew my changes right onto the photocopy with a pencil, and then fiddled around erasing and re-drawing until I was happy with the layout. Then I re-drew the final outline with a Sharpie. Sharpie ink seeps through to the back and gives a clean outline to trace onto the fabric. No one will ever know that it is a mirror image of the original!

With the loose weave of the Cashel linen and the dark lines from the Sharpie, I didn't even need a light box to trace the pattern onto the fabric. I traced first with a pencil, and then again with the blue water-erasable pen to give a clear line. I hate it when the lines disappear while I'm stitching! 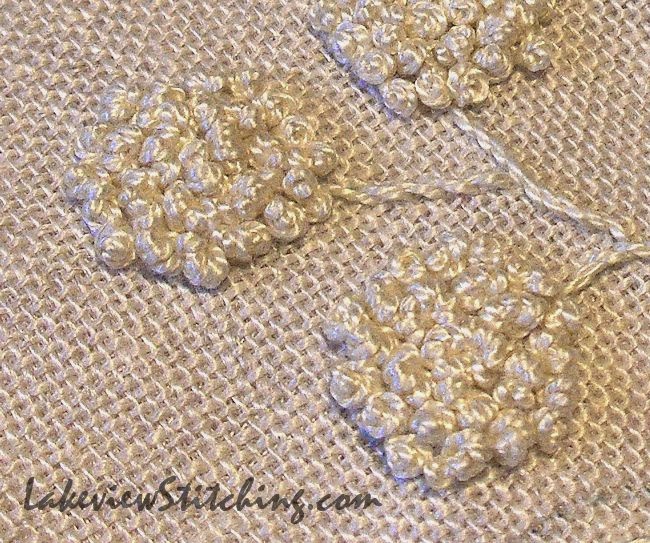 Then I jumped right in! The flowers in the first picture were pretty straightforward, stem stitch and padded satin stitch. The berries were a little different for me, though. Some of the French knots in the centres have eight wraps! I think they would look better in proper Mountmellick thread, which makes a smooth knot. But overall, I like the way the flax linen and ecru perle cotton look together: 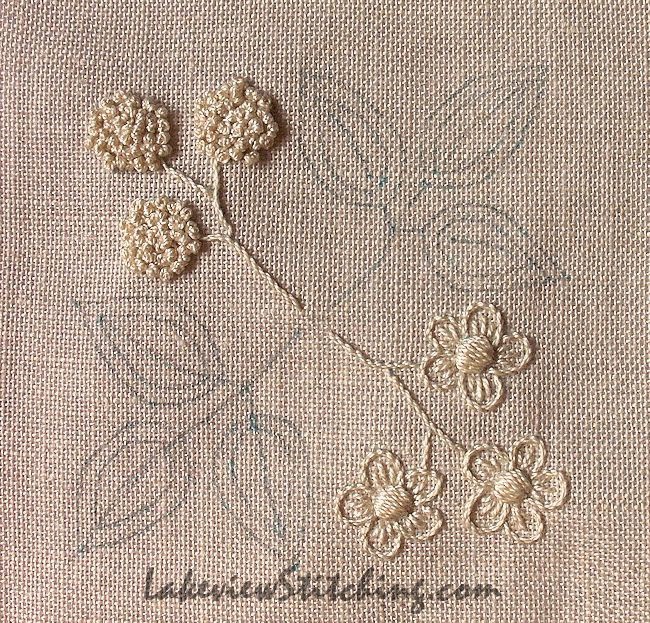 At this point I had to stop, because the edges were fraying and my sewing machine was then in the shop. So I packed it away until recently. But now I'm making progress again. One set of leaves is outlined with Cable Plait Stitch, which is a bit of a stinker. I'll talk about that next time!