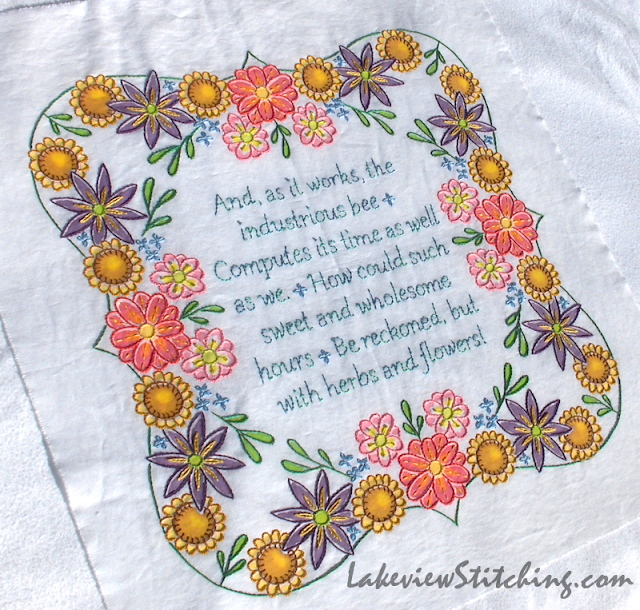 We've had some beautiful, clear sunshine today, and I was finally able to get a good set of photos for this block. It's the centre, Block 5, of Leanne Beasley's stitchery quilt Down in the Garden. Yes, I know it's wrinkly, but I don't want to iron it until I'm ready to assemble the quilt. 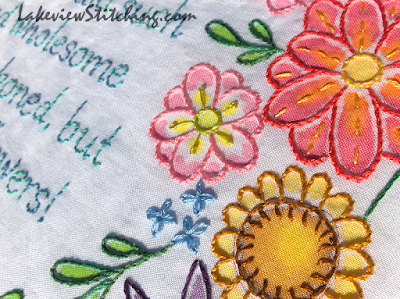 There has been quite a lot of "let's see what happens" so far, but in the end I'm well pleased with how it came out. I really like the double curve, ogee outline around both this block and the birdhouse blocks. I also like the way Beasley used the green sprigs and the outside points to suggest a diamond shape inside the curves. I chose the coral and pink colours for those flowers to emphasize the diamond, and I think that worked well. 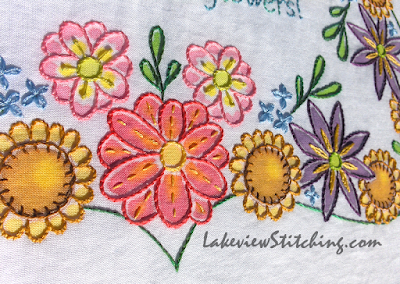 My original plan for the small lazy daisy flowers was to make them dark blue, same as here. It was not successful, and I am sorry that I didn't take a photo to prove it! In the light blue, the small flowers provide some contrast and support for the large flowers. I was really surprised by how much better the large flowers looked once those little blue flowers were stitched! It was a good lesson to me. And, I think that same colour of blue is going to fix my problem with Prairie Star as well. 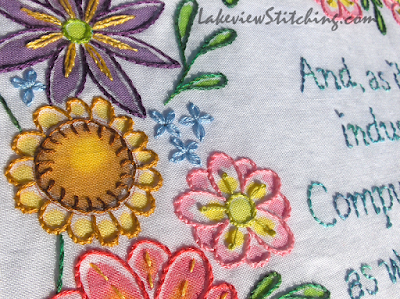 With all the stitching completed, this block has ended up quite a bit darker than the light, watery effect that I originally intended. This was mostly because the Tsukineko inks were too difficult to control when they were really watered down, so I had to keep them more intense and pure. I think this has also made the project more formal, and I'm not sure all those gingham fabrics that I hoped to use are appropriate any more. But the inspiration fabrics by Tamara Kate still work well. 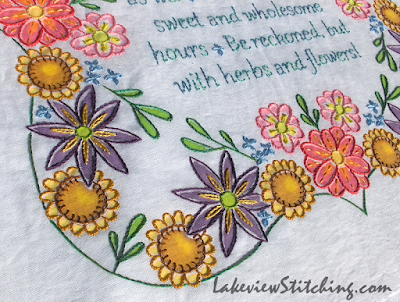 It's a big block, 15 inches square, and a lot of stitching. I really like all the words and sentiments in the poem, but gosh, the words were boring to sew! Fortunately, my commitment to stick with just the one project made it easier.

I keep thinking that now I am mostly done, which is not true at all! There are still 3 more birdhouses, and all four of the watering can blocks to do. The applique butterflies on the watering cans are wickedly difficult, but I think I have them under control now.

In any case, my plan to focus on just one project at a time is a big success, even though I have changed it to two projects - one hand sewing and one machine sewing. Momentum is building, and right now I'm not even tempted to change projects. I'll show you the machine sewing project next time -- I think it will be a surprise!

Email ThisBlogThis!Share to TwitterShare to FacebookShare to Pinterest
Labels: Down in the Garden, Embroidery, Stitchery, Tsukineko inks