For a change of pace, today's post is (mostly) about what I'm not going to make! 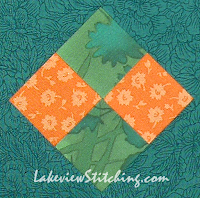 Early in January I had a big hunt through my stash for this orange fabric, which I wanted for My Country House. It is the perfect orange, not too gold and not too brown, but that's beside the point right now. The point is that my search started a whole process of digging through all my old quilty projects and making some decisions:

The result has been that suddenly I've been working on, and thinking about, a whole bunch of projects at the same time. There hasn't been much to show, because I'm spread too thin. For example, in February I set myself a schedule to get Texas Star to the flimsy stage. According to the schedule, I should now have 227 stars joined up. As of today, the total stands at 146... 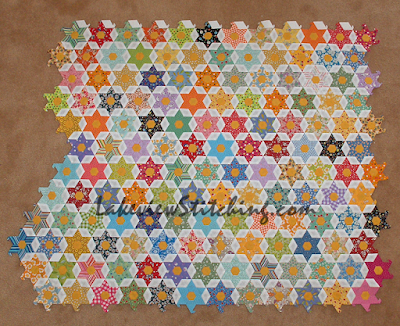 ...which is progress over last time... 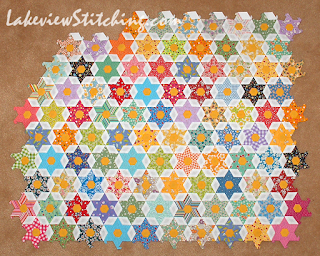 ...but not ideal. Still, although progress is slow, I think we will all agree that it is looking pretty good.

What you may not remember is that this is Texas Star 2.0. In 2011 (before this blog), after about 25 years and two cross-continental moves, Texas Star 1.0 went in the bin. At that point there were about 250 machine-pieced stars finished and ready to join. But, it just had too many problems, including dodgy fabrics and dodgier sewing. About 16 months later, Texas Star 2.0 got off to a much better start, and it will definitely be finished. But for now, I'm packing it away, because as I said, I'm spread too thin.

As you've probably guessed, the project I'm not going to be finishing is Sedona Star, shown at the top of the page. In fact, those photos are all that remain, because it all went in the bin in February. It had many issues, but the biggest was that it was big -- bed sized -- and my colour scheme was more suited to a wall quilt. So yes, Sedona Star 2.0 will be smaller. It is all planned, but not started.

In fact I had about 12 to 15 done, but there are no photos, and these went in the bin in February too. Gosh, I imagine you are saying, I know they could have been used somewhere. And surely something could have been done with all those pretty Sedona Star circles. Yes, I thought about that quite a bit. But finally I realized that I can't do it all, and it would be a bigger shame if my newer, and much nicer, projects didn't get made because I was still flogging a dead horse with these.

So, Down in the Garden will get the nod, and we will see what happens when I focus on just one project at a time. I think it will be a perfect summertime project. :D