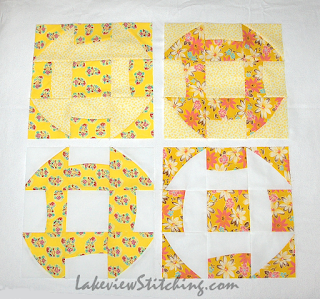 So, this is my last post until after Labour Day (September 5). After my summer blogging vacation last year, I came back full of inspiration and enthusiasm, and I am looking forward to the same effect again this year. Some quality, unplugged time now will be the best way for me to keep things fresh long term.

I'm ending where I started, with improv letters and words: 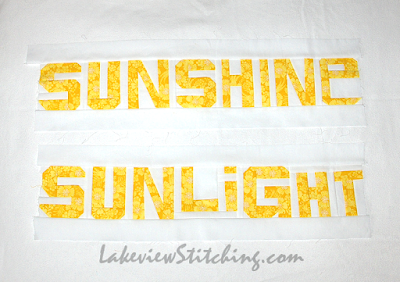 I have to say, they do look better than my first efforts! I had cut that yellow fabric into random strips for a string quilt, and regretted it soon after. So this is a much happier plan. I was just able to eke out both words from the strips I had. I made the smaller letters first, and then the more complicated letters got larger. They have finished at about 4" (10 cm) high.

I hoped to finish all the churn dash blocks by now... 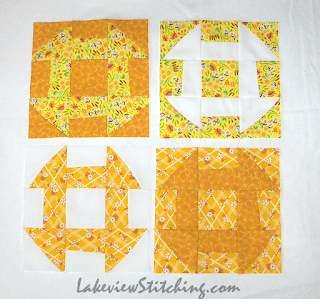 ...but my wrist had other ideas. There is a lot of trimming with the rotary cutter on these improv blocks and especially on the improv letters, so I am now on enforced rest again.

Have you noticed anything unusual about these blocks yet?


Because they are different sizes: 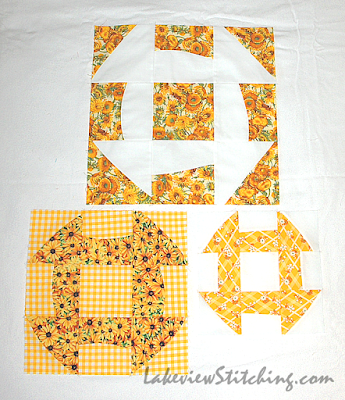 So far I've made them in 15", 12", and 9" sizes, and the 6" ones were in progress when my wrist packed it in. So close! Hopefully it will all be together by the fall. (And maybe quilted, too, although I am trying not to make plans!)

Although I am now the proud owner of two books on Liberated Quiltmaking by Gwen Marston... 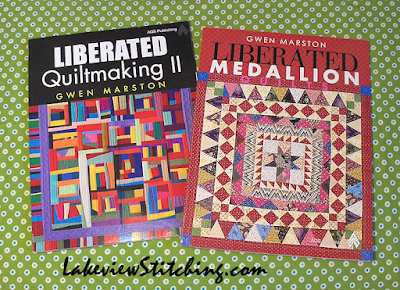 ...my Gwennie Medallion is another casualty of my sore wrist, so I will punt on that too until the fall. Right at the beginning of the month I made a bunch of blocks for the first border of the medallion quilt along... 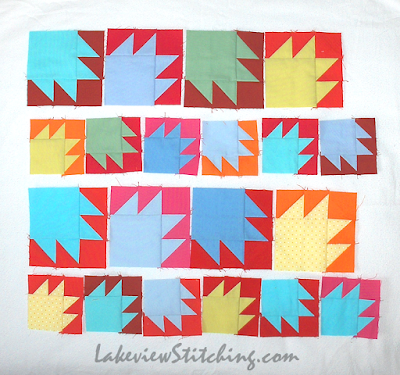 ...but they don't match my "olive" theme. (You can see I am still on this "blocks in different sizes" kick.) Since I started out with olives, I think I want to keep them going. The theme for the first border is supposed to be "childhood," which is a challenging theme to align with "olives." These mama and baby bear blocks are just headed in the wrong direction.

My best thought right now is to do something with hourglass blocks, in mostly the same fabrics as above, because childhood was a long time ago! You see my problem. Over the summer I will check what the themes for the next rounds will be, and I expect that it will all come together by the end.

AHIQ has opened up a whole new world of improv quilting, which has empowered me to take on this Gwen Marston-inspired project as well. At a minimum, it's made me a lot more relaxed about perfect lines and corners, even on traditional projects. So that has speeded things up a little! But most of all, I find myself thinking that a project feels too rigid when everything is exactly perfect. I've noticed that the less perfect projects seem to make a better emotional connection with the viewer, and for me, that is the highest goal of any art or craft. I'm interested to see where things go next!

In the meantime, check out all the other quilters at AHIQ here, and the brave Gwennie Medallion makers on July 1 here, have a great couple of months, and I'll see you in September!
Posted by Monica at 7:11 AM