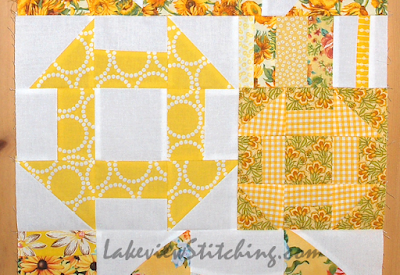 Ok, I think my summer break has been long enough. I am pitying the Modern Quilt Guild, who are in a storm of controversy over a recent post about copyright and derivative work. (Edit Sept 2016: The post has been removed now. You can read their new approach here. There is also a link there to the original post.) I know I had more than one heated discussion about copyright when I did the website for my quilt guild. The fact is that current copyright law is out of date, and quilters are not the only ones who think so. This 2013 statement by the US Register of Copyrights sums up well the frustration people are feeling. This is my favourite line:

...if one needs an army of lawyers to understand the basic precepts of the law, then it is time for a new law.

And if you don't think that the current laws are bad for artists, let me remind you of this injustice...


...which you can read about here, if you don't already know it.

An organization like the MCG (or any guild), has to follow the law whether they like it or not. But, I do think MCG's new, hard line refusal to consider "derivative" works for judging at their shows is out of tune with the current understanding of how artistic production really happens.

We all stand on the shoulders of the ones who came before us. As an example, let's consider my (still unfinished) "Sunshine" quilt, which has made a little progress since my last post in June. 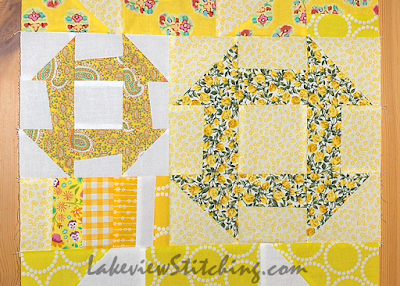 Here, and at the top, are a couple of the smaller 9" and 6" churn dash blocks. This time I used Gwen Marston's "liberated" recutting technique to give each unit its own character. On the larger blocks I had used Sujata Shah's curved piecing techniques... 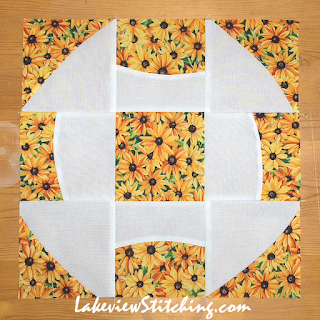 ...but honestly it was a lot of work and I thought the curves would get lost in the smaller units anyway.

As far as I know, it was my idea to apply Sujata and Gwen's techniques to a compound block like the churn dash. It's not earthshaking, just a small, incremental expansion on the earlier idea. Since my first post in February, I've noticed that Missouri Star now has a tutorial for a wonky churn dash quilt too. Did they see mine? I don't know. But, their quilt is pretty cute too.

Mine, of course, has the added enhancement of blocks in many sizes. I'm putting them together in sections like this: 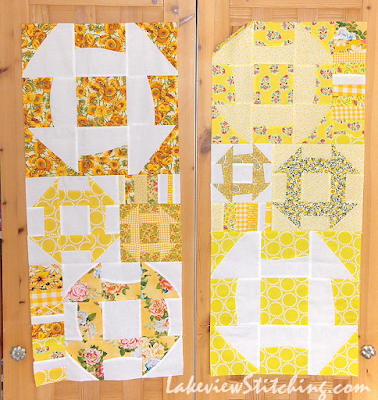 This is not a new idea either. My inspiration was the quilt Bohemian Charm... 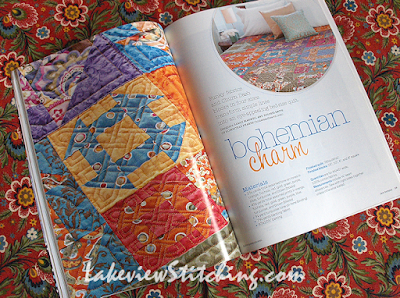 by Sarah Maxwell and Dolores Smith of Homestead Hearth, and found in my much cherished Sew Scrappy, Vol. 2 from Better Homes and Gardens. The block sizes in this quilt were weird -- 4" and 10" to start -- so a redesign was always on the cards for this one. They also grouped the blocks into rectangular sections, but filled the gaps with squares.

My first plan was to use squares to fill in the gaps too, but after I made the words... 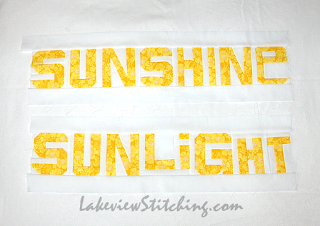 ...I realized I could use up those yellow strings I made by mistake, and that would be better all around. So now those strings are more "happy accident" than mistake! 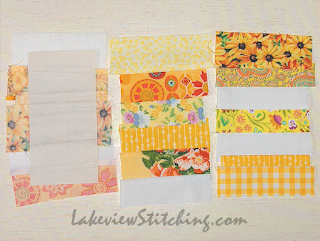 The strings are chain pieced onto papers cut to size. I didn't include the seam allowances on the paper, but next time I will, because it would be easier to judge the size that way. They are trimmed when I'm ready to assemble the sections.

Oh, and for those words, I didn't "figure out the math," and I've never read instructions on how to make letters either. I just took yellow and white strips and put them together by eye, same as some people can play music by ear. But the idea to piece letters and words definitely came from photos online.

So, it could be said that this quilt is derived from ideas by Sarah Maxwell, Dolores Smith, Sujata Shah, Gwen Marston, Bonnie Hunter, and probably others too. But I wouldn't expect any of them to knock on my door and say "Hey, I own your quilt. Stop putting pictures of it online." They all had their own sources of inspiration.

I'm not saying this could be an award-winning quilt that the Modern Quilt Guild would refuse to hang in their show. I'm asking you to look at all the meaning and value inherent in the combined influences of the quilts that inspired even this trivial jumble of fabric, and to say that we shouldn't turn our backs on that. Truthfully, I don't think it's possible, but I think it would be a huge loss to try.

Current copyright laws may not accept that art evolves, and the student can outperform the master, but there is nothing stopping quilters from recognizing and celebrating their place in the ongoing discourse of quiltmaking. Eventually, the laws will catch up.


And if you are not now completely exhausted, check out the other blogs at the Ad Hoc Improv Quilters link up, right here!
Posted by Monica at 8:02 PM