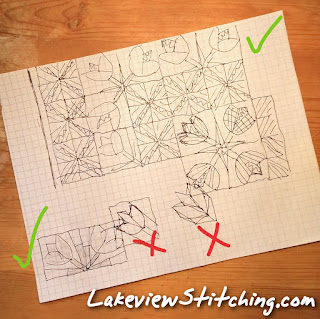 One of the AHIQ founders, Ann of Fret Not Yourself, has been hosting a quilt along with a really charming recipe that combines string pieced blocks and string pieced applique tulips. I've been lurking and admiring it for a while, but I didn't think I had the bandwidth to make it.

After I finished the centre of Rose Boll and made the dubious decision to put it away, I pulled out Ontario Shores. I finished all those blocks, 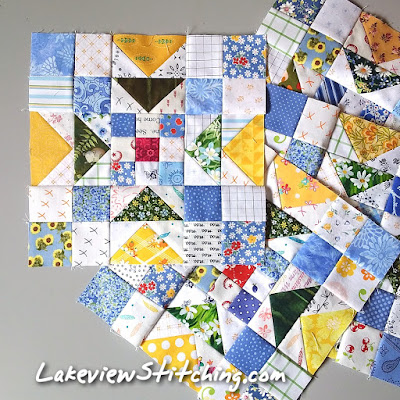 ...and made a start on attaching all the sashing. It's looking pretty good. But I just ran out of steam. Time for something new!

I like almost everything about Ann's quilt except the size, so the first thing I did was that sketch at the top to see how it would look larger. Think it's going to be pretty good. 😊

The string tulip quilt along has an improv mindset, so there is plenty of encouragement to do your own thing and run with it. And everyone knows I change designs all the time. 😂

But I do try to preserve the things that drew me to the project in the first place. In this case there were several. Ann has made two versions of this quilt now, one with a blue background and mainly red tulips,

and one with a light print background and mainly blue tulips. 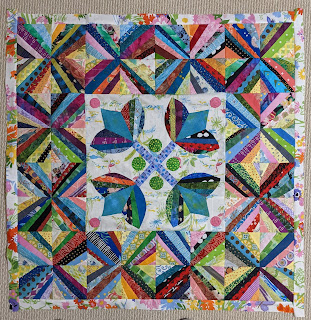 So looking at them both, I considered what I like about them.
So overall, my quilt will look a lot like Ann's. Besides the size, I only have two other changes in mind.

1. Because I'm going to do the applique with my little Eversewn Sparrow, a smaller block will be easier to handle. I broke it down to 10" squares with one tulip each.

2. Rather than Ann's dots I may add leaves to the tulips. My first thought was to sew on spiky triangles after the applique was done. But I didn't love that. It just feels too sharp and aggressive. I love the wider tips of the X blocks, so I'm thinking I'll try that shape for the leaves too. You can see that idea in the bottom left of the first photo at the top. That will have to be pieced before the applique is attached. Or, maybe those could be appliqued too. Idk yet. 😄 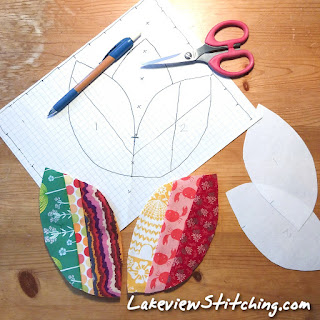 I still have SO much Ricky Tims' Stable Stuff from my early attempt at Sedona Star, so I'll just use that as a base for the petals and leave it in the quilt. There are only 24 tulips in my queen size quilt, so I just traced each one in pencil rather than making a clean printable template. I think it's probably better if they aren't exactly all the same.
I'm a little concerned that I've done the most fun part first here. 😂 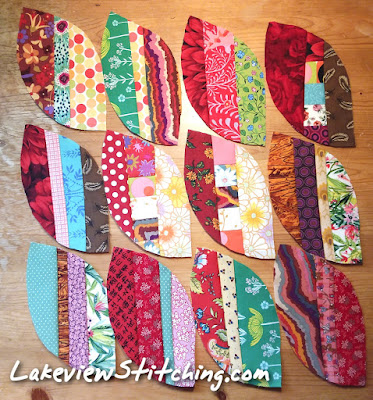 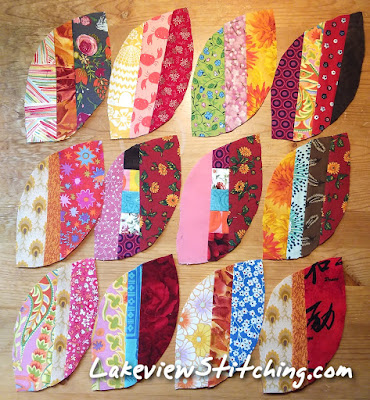 I had those strip sets in my scrap box, so I threw them in. 24 sets of string petals are now done. 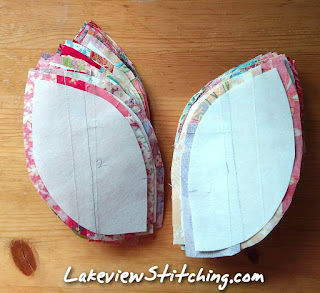 And my scrap box is exactly as full as it was before. Hopefully the X blocks will use up a little more!
Tysm to Ann for permission to use her photos, and this excellent QAL! Next up, the applique background. Probably.