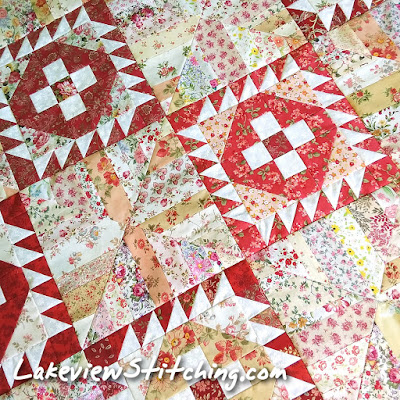 As I slowly excavate back through my UFOs, the next one that caught my eye was Rose Boll, started in 2017 and last seen here in June 2018. I have to admit, every time I read back through those old posts I just laugh. So optimistic! 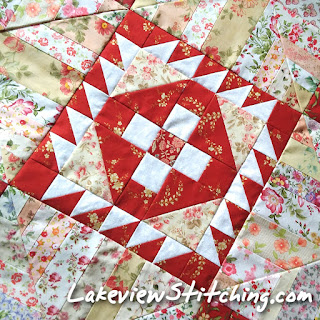 Anyhoo, I don't think I ever gave much detail about my process on this quilt, so I'll cover that a little now. As you see above, most of the blocks have the same red fabric in the centre as well as the HSTs in the sawtooth edge. 20 HSTs are needed for each block, but I foundation paper pieced them in sets of 24. So, there were leftovers.

I decided to use the leftovers in the main quilt also, and made a few scrappy blocks. Since they were different anyway, I used different colours from my stack of floral "neutrals" for the centres. The gold and pink are from the same collections as some of the reds and whites I used, so it still ties together. 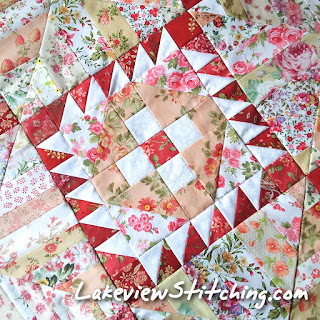 When I started to work on it this year all the string blocks were done, and there were only about 6 of the sawtooth blocks left. I finished those, laid it all out, and sewed together the centre. 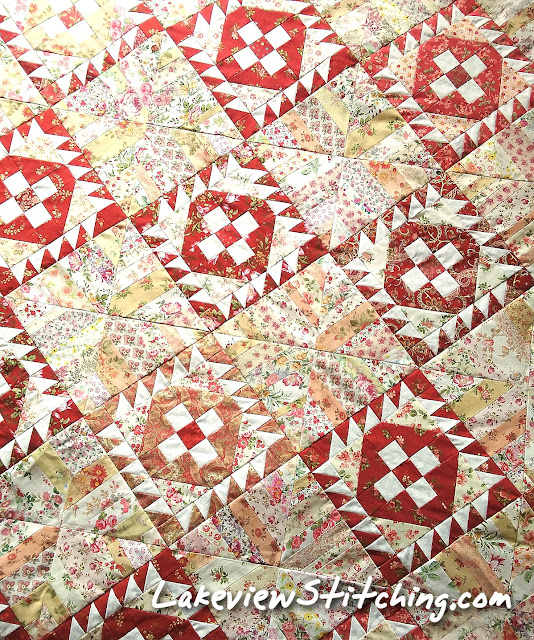 As always, lol, I had considerable debate about the border. Bonnie Hunter's original quilt has 3 rows of diagonal set squares in the border that looks great. I sketched a few variations on that, and decided it was too much in my busy fabrics. A single row of squares looked a little better on paper. But, once the centre was complete I realized it's more than enough as it is. I'm just going to do a narrow inner border in gold and a wider outer border in scrappy chunks of red, and call it done.

And then I did a Very Dangerous Thing, and folded it up and put it away without finishing the border. I just wasn't in the mood to iron and cut those red chunks. 😂

And then I pulled out another project. 😜